Panthers Trade Up, Draft Mississippi QB Corral In 3rd Round 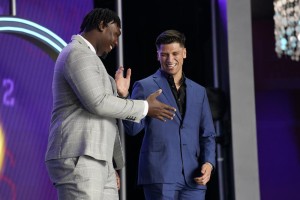 CHARLOTTE, N.C. — The Carolina Panthers selected quarterback Matt Corral from Mississippi after trading into the bottom half of the third round.

The Panthers gave up this year’s fourth round pick and next year’s third-round pick to the New England Patriots to get Corral.

Carolina’s next pick is in the fifth round on Saturday.