A Naismith Basketball Hall of Fame nominee, McKillop, 71, is the most successful coach in school and league history and concludes his illustrious career ranked 54th on the NCAA Division I wins list with 634 victories. 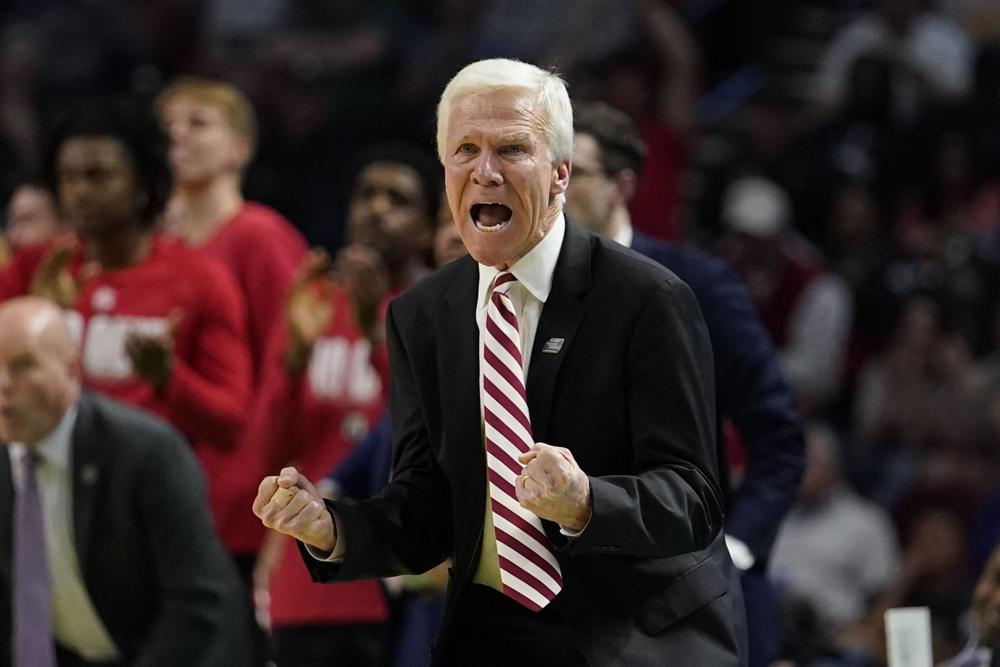 FILE – Davidson coach Bob McKillop yells during the second half of the team’s college basketball game against Michigan State in the first round of the NCAA men’s tournament Friday, March 18, 2022, in Greenville, S.C. Longtime Davidson coach Bob McKillop is retiring, ending a run that included coaching NBA star Stephen Curry with the Wildcats and ranking among the Division I men’s basketball’s winningest active coaches. McKillop announced his retirement Friday, June 17, 2022, at a campus news conference, effective at the end of the month. (AP Photo/Brynn Anderson, File)

During the 2021-22 campaign, McKillop led the Wildcats to their second-most wins in a single season, going 27-7 overall, which included a program-best 15-3 mark in Atlantic 10 play. In addition to earning his 11th (9 – SoCon, 2 – A-10) Conference Coach of the Year honor, McKillop’s final campaign was capped by the school’s second NCAA Tournament at-large bid.

The 2007-08 NABC National Coach of the Year led Davidson to the 2008 NCAA Tournament Midwest Regional Championship game with victories over three nationally-ranked foes — Gonzaga, Georgetown, and Wisconsin. The Wildcats’ unbelievable run ended with a two-point loss to eventual champion Kansas, and Davidson finished the campaign with a final ranking of ninth in the ESPN/USA Today Poll.

Along with tying the school’s single-season record for wins with 29, McKillop and the ‘Cats strung together 25 consecutive victories, the longest streak in the nation, before falling to the Jayhawks on the doorstep of the Final Four.

For 22 years, McKillop’s teams competed in the Southern Conference where they put together one of the most remarkable runs in league history. From 1992-2014, Davidson won 447 games, including a 278-88 record against league competition, making McKillop the most decorated coach in the conference’s 100-year existence.

Along with winning 13 regular season titles and seven tournament crowns as members of the SoCon, the ‘Cats went undefeated in league play three times under McKillop, highlighted by a 20-0 record in 2007-08. Davidson had a 43-game conference win streak from 2007-09. It was one away from tying the SoCon record and the eighth longest in NCAA history.

On February 1, 2014, during a pregame ceremony celebrating McKillop’s 25th season, Davidson College administrators announced the basketball court inside John M. Belk Arena would be named “McKillop Court” in his honor.

Picked to finish 12th in the 2014-15 preseason poll, McKillop guided the Wildcats to the Atlantic 10 regular season title in their inaugural season and their first-ever NCAA Tournament at-large selection.

McKillop coached his 1,000th career game at Davidson on January 29, 2022, becoming just the 10th coach in NCAA Division I history to reach the milestone at one school.

McKillop’s teams have been successful off the court as well. He has had a perfect Academic Progress Rate of 1,000 each year since the NCAA began tracking it in 2003.

A 1972 graduate of Hofstra, McKillop has coached eight All-Americans, an Academic All-American, 11 Conference Players of the Year, five Freshman of the Year and 73 all-conference selections.

Fifty-seven of his players have gone on to play professionally, including Stephen Curry, the 7th pick in the 2009 NBA draft, who has led the Golden State Warriors to three NBA titles while earning back-to-back NBA MVP honors.

Long-known for his connections around the globe, McKillop has coached more than 40 international players from 24 different countries.

An inductee into the Hofstra Basketball andNYC Basketball Hall of Fame, McKillop was signed and then cut by the Philadelphia 76ers before becoming a history teacher and coach.

A native of Queens, N.Y., McKillop’s coaching career started at Holy Trinity High School (1973-78) on Long Island where he achieved an 86-25 record. In 1978, he joined Eddie Biedenbach’s staff at Davidson as an assistant coach before returning to New York a year later to serve as the head coach at Long Island Lutheran (1979-89). There, McKillop compiled a mark of 182-51 to go along with five New York State Championships.

On May 19, 1989, McKillop was hired as the head coach at Davidson by then-Director of Athletics Terry Holland.

· 11-Time Conference Coach of the Year