ROCK HILL, S.C. — A 27-year-old woman has been arrested and charged for stabbing her boyfriend multiple times during an altercation at a Rock Hill hotel early Wednesday morning, police say.

Around 1:17 a.m., Rock Hill Police responded to the Extended Stay America on Canterbury Glen Lane for a welfare check.

Dispatch advised police that a man had entered the lobby of the hotel suffering from several stab wounds.

At the scene, officers located a 27-year-old male victim bleeding from his back.

The victim told police he and his girlfriend were arguing when she stabbed him in the back resulting in three visible wounds.

Officers went to the room the victim was staying in and made entry, observing a large amount of blood on the bed.

Officers also observed the hotel room to be in disarray with multiple furniture pieces being knocked over onto the floor.

Miller told police that she and the victim have been cohabitating for almost three years, and they had been arguing.

When asked about the victim’s injuries, Miller told police she “blacked out” and that she “didn’t mean to hurt him.”

EMS and Fire arrived on scene to take the stab wound victim to Piedmont Medical Center for emergency surgery due to his injuries.

Police arrested and charged Miller of New Mexico with Domestic Violence of a High and Aggravated Nature on arrest warrant and Possession of a Weapon During a Crime of Violence. 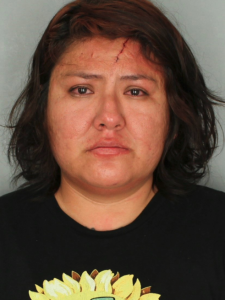 Officers did recover the knife at the scene.