COLORADO SPRINGS, CO — Barrett Hudson can’t escape the memories of last weekend. He was at Club Q when a gunman opened fire inside the gay night club.

Hudson remains in a hospital bed in Colorado. 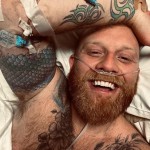 “He had the A.R. 15 and he pointed it at this dude,” continued Hudson, “I takeoff running. It was a double door in the back. I get hit several times. I knew I was hit. I didn’t know how many times I got hit.”
It was nine times. Once in each arm, and seven in the back.
“Even in my mind, before I got shot I was thinking run, don’t hide because if he finds you, you’re dead,” said Hudson.
Hudson managed to escape, making it to a nearby 7eleven.
In the early morning hours, Hudson’s father got a call no parent should ever have to answer.
“I called my dad and I told him that I love him. I told him I’ve been shot. You know I said goodbye,” Hudson said as he fought back tears.
Hudson was one of 19 shot and survived. Five others, didn’t share that fate.
“I’ve looked at their photos over and over again and I feel like I asked myself this question why me?” said of the five victims killed.
Hudson plans to come back to Charlotte to heal. While he’s here, he has another mission. Pleading to owners of gay bars to increase security.
“I do not want this to happen in my hometown. I can’t save the world, but I feel like I could put my mark on Charlotte to help prevent this,” explained Hudson.
The accused gunman had his first day in court on Wednesday.  Hudson has a strong message for the man who nearly killed him.
“You didn’t win. Not with me and I’m not going to let you win,” said Hudson.