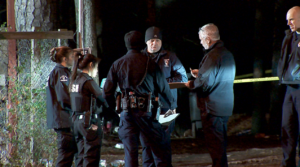 CHARLOTTTE, N.C. — Police have identified Lawrence Green, 32, as the man who was shot and killed on Tom Hunter Road late Saturday night.

A witness said that they saw Green and another individual arguing before the suspect shot Green. Police have yet to name the suspect.

Anyone with information is asked to call 704-432-TIPS to speak with a homicide detective or contact Crime Stoppers anonymously at 704-334-1600 or at charlottecrimestoppers.com.

CHARLOTTE, N.C. — Police say a victim arrived at a nearby hospital, where they were pronounced dead.

On Saturday, just after 10 p.m., officers were called to a shooting on Tom Hunter Road near North Tryon Street. Police did not find any victims at the scene, but were later notified by the hospital of a victim.

Investigators have not said what led up to the shooting or if any arrests have been made.