The Bills at Bengals game will not be resumed this week as Safety Damar Hamlin remains in critical condition after collapsing on the field Monday night.

The NFL released the following statement on January 3rd:

“The NFL continues to be in regular contact with the medical team caring for Damar Hamlin, and also the Bills and Bengals organization and the NFL Players Association.
After speaking with both teams and NFLPA leadership, NFL Commissioner Roger Goodell informed the clubs today that the Bills-Bengals game will not be resumed this week.
The NFL has made no decision regarding the possible resumption of the game at a later date. The league has not made any changes to the Week 18 regular season schedule.
We will continue to provide additional information as it becomes available.”

CINCINNATI (AP) — Buffalo Bills safety Damar Hamlin collapsed on the field Monday night and was administered CPR before being driven to a hospital, where the NFL said he was in critical condition, and Buffalo’s game against the Cincinnati Bengals was suspended for the night.

The NFL announced just over an hour after the injury that the game would not resume. When or if the teams would return to the field was not immediately clear. 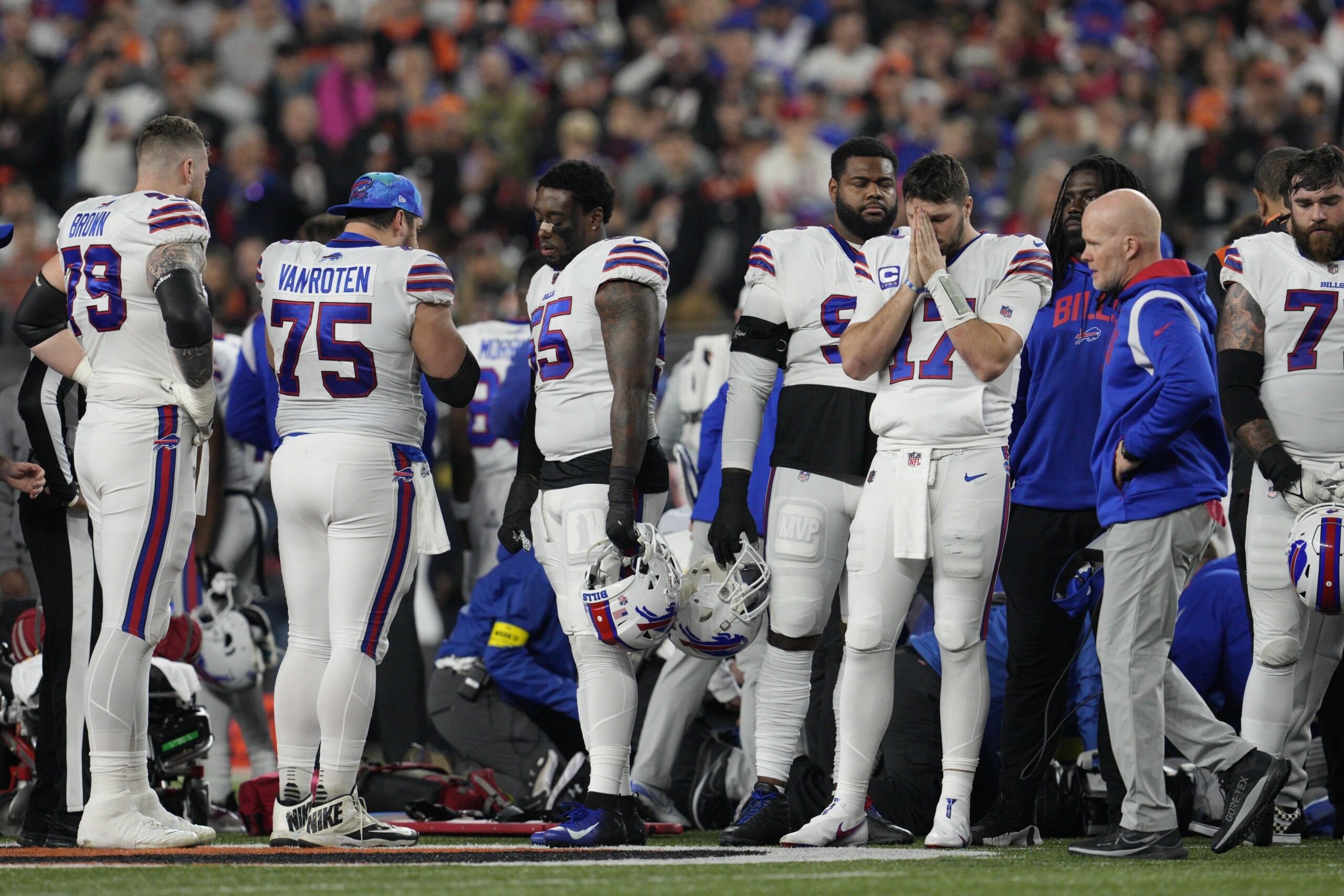 Buffalo Bills quarterback Josh Allen (17) pauses as Damar Hamlin is examined during the first half of an NFL football game against the Cincinnati Bengals, Monday, Jan. 2, 2023, in Cincinnati. (AP Photo/Jeff Dean)

“Our thoughts are with Damar and the Buffalo Bills. We will provide more information as it becomes available,” the league said in a statement. “The NFL has been in constant communication with the NFL Players Association which is in agreement with postponing the game.”

Hamlin collided with Bengals receiver Tee Higgins after a completion in what appeared to be a routine, if violent, tackle. He got to his feet, appeared to adjust his face mask with his right hand, and then fell backward about three seconds later and lay motionless.

Hamlin was treated on the field by team and independent medical personnel and local paramedics, the NFL said. He was surrounded by stunned players from both teams.

An ambulance was on the field four minutes after Hamlin collapsed, with many players in tears, including cornerback Tre’Davious White. The quarterbacks — Buffalo’s Josh Allen and Cincinnati’s Joe Burrow — embraced.

Hamlin collapsed at 8:55 p.m., and when he was taken off the field 16 minutes later, the Bills gathered in prayer. He was driven to University of Cincinnati Medical Center. Five minutes after the ambulance departed, the game was suspended, and players walked off the field slowly and into their locker rooms.

Hamlin’s uniform was cut off and he appeared to be getting CPR from medical personnel. ESPN reported on its telecast that Hamlin was also given oxygen.

“No one’s been through this,” longtime NFL quarterback Troy Aikman said on the ESPN telecast. “I’ve never seen anything like it, either.”

The Bengals led 7-3 in the first quarter of a game between teams vying for the top playoff seed in the AFC. Cincinnati entered at 11-4 and leading the AFC North by one game over Baltimore, while AFC East champion Buffalo was 12-3.

The aftermath of the injury was reminiscent of when Bills tight end Kevin Everett lay motionless on the field after making a tackle on the second-half opening kickoff in Buffalo’s 2007 season-opening game against the Denver Broncos.

The 24-year-old Hamlin spent five years of college at Pitt — his hometown — and appeared in 48 games for the Panthers over that span. He was a second-team All-ACC performer as a senior, was voted a team captain and was picked to play in the Senior Bowl.

He was drafted in the sixth round by the Bills in 2021, played in 14 games as a rookie and then became a starter this year once Micah Hyde was lost for the season to injury.

A tweet from the Pitt football account was simple and clear: “Damar Hamlin is the best of us. We love you, 3,” the tweet said, referring to Hamlin by his college jersey number. “Praying for you.”