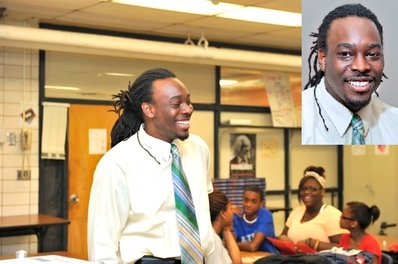 CHARLOTTE, N.C. — James Ford of Garinger High School is the 2014 Burroughs Wellcome Fund North Carolina Teacher of the Year. Ford is a ninth-grade world history teacher who began his career in Rockford Public Schools in Rockford, Illinois. He has been a teacher in Charlotte-Mecklenburg Schools since 2010.

The announcement was made today at the Burroughs Wellcome Fund luncheon in Cary, NC.

“North Carolina’s teachers are valued professionals who are providing a critical service to future generations of students,” said John Burris, president of the Burroughs Wellcome Fund.

“My personal journey has been both long and unorthodox,” Ford said. “But in the end, I realize that it was my passion that ultimately led me to my purpose—education.”

He earned a bachelor of science in mass communication from Illinois State University in 2003 and a master’s degree in teaching from then-Rockford College in 2009. Ford is currently pursuing a degree in educational leadership from Wingate University. He is a member of Alpha Phi Alpha Fraternity, Inc.