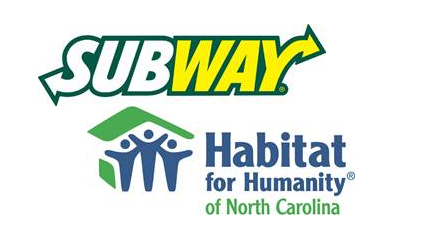 CHARLOTTE, NC,  – Like many organizations, Habitat for Humanity relies on volunteers to accomplish its mission to “build houses and hope.” Locally-owned SUBWAY® restaurants are thanking Habitat volunteers at work sites across the Carolinas with a free catered lunch during National Volunteer Week, April 6-12.

“Volunteers are the lifeblood of our organization and some of our affiliates are completely volunteer run,” explained Christine Odom, Habitat for Humanity of North Carolina executive director. “We appreciate Subway joining us to show our neighbors and community members we value what they do to make our state better.”

Approximately 2,000 Habitat for Humanity volunteers working across the Carolinas will be catered boxed lunches by the local franchise owners and employees of SUBWAY® restaurants, including Habitat volunteers in Anson, Cabarrus, Iredell, Mecklenburg, Union and York counties.

“There are many unsung heroes who help make our community a better place,” said Wendell Rowell, local owner of seven SUBWAY® restaurants in Mecklenburg and Union counties. “We wanted to take this opportunity to say ‘thanks’ to Habitat volunteers for giving back in a very tangible way.”

Each year, Habitat for Humanity’s 80 affiliates in North Carolina depend on approximately 175,000 volunteers to complete hundreds of building projects. The spring build season is underway. Information on becoming a Habitat volunteer is available at www.habitatnc.org.

Volunteering in the United States fell in 2013 to its lowest rate since tracking began just over a decade ago, according to the U.S. Bureau of Labor Statistics’ report. North Carolina has an annual volunteer rate of 25.8 percent, with 2.05 million volunteers serving 265.5 million total hours per year.