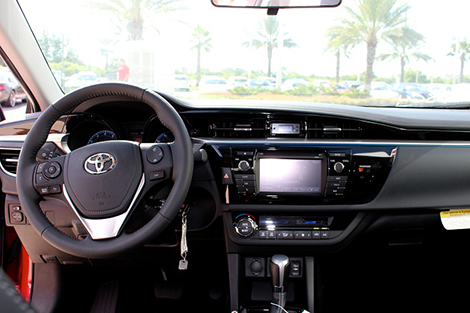 If you’re in the market for a reliable ride that happens to have an incredibly low price tag, we have some fantastic news for you! The 2015 Toyota Corolla near Charlotte has FINALLY arrived at our new Toyota dealership. That means that you can get your hands on one of the most dependable rides available on the market! Why wouldn’t you want to get behind the wheel of the world’s best-selling vehicle? This new Toyota boasts fantastic fuel efficiency, stellar looks, and optimal performance—it’s the crème de la crème!

The N Charlotte Toyota Corolla received an overhaul last year (in terms of looks), so there weren’t many changes made. Why would the automaker mess with perfection? Check out what we mean and get to know the 2015 Toyota Corolla N Charlotte!

What’s not to love about this N Charlotte Toyota? With sleek lines and muscular poise, this new Toyota near Charlotte truly sets itself apart from the rest of the vehicles available on the market. In terms of looks, this Toyota wows drivers. Here are some things you can look forward to when you make this Toyota yours:

In addition to having a sleek look, this N Charlotte Toyota also offers some of the best technology available! You can feel comfortable backing out of parking spots with the integrated backup camera. You can easily see the image in the 6.1-inch touch-screen display! You can also groove to your favorite music using the Toyota Entune Audio System.

2015 Toyota Corolla near in N Charlotte is fuel-efficient

As you can see, this sleek and modern Toyota is worthy of being parked on your driveway! Come check it out today at 13429 Statesville Road or give us a call at 888-883-3797 to schedule a test drive!

Police: 2 Suspects Charged In The Death Of A 3-Year-Old Boy Shot And Killed In Northwest Charlotte