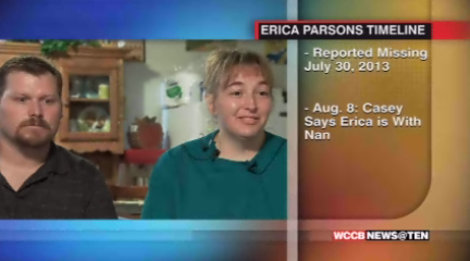 SALISBURY, N.C. — The adoptive parents of missing teen Erica Parsons did not appear in court for a custody hearing involving their two youngest children.  The case was continued.

Officials say Casey Parsons is currently in the emergency department at the Wake Forest University Baptist Hospital.  There is no word on why she is at the hospital.

The children’s grandmother, Janet Stone, will continue to have temporary custody until a judge makes a final decision in the case.

Both of the Parsons were convicted on federal fraud charges and face sentencing in February.  They are accused of receiving government funding for Erica while she was missing.

Erica was first reported missing in July of 2013 but no one has actually seen her since 2012.  Police have repeatedly said they believe the Parsons are lying about Erica, who allegedly went to live with a grandmother named ‘Nan’ in Asheville.  Police say that Nan does not exist.

There is no word on a new date for the custody hearing.