Man on the Edge: What Musician Do You Want to See in Charlotte? 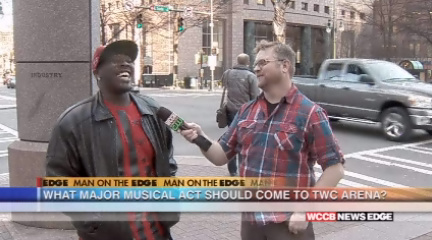 Time Warner Cable Arena is more than just basketball, hockey and circuses.  It’s a powerhouse for concerts as well.  And there is a major name that’s booking the venue… can you guess who?

The Cable Box says we have to wait until Thursday morning at 11:30 to find out who’s coming.  And while that’s a little coy, and maybe a little showy, they have a history of these things paying off.  Both the Observer and Creative Loafing point out: the last time they did this kind of reveal was to announce Paul McCartney’s show.

And since we have no idea who it could be, we’re left to speculate about acts we hope it might be.  Our Man on the Edge, Robert Wilder, probably wants to see Archers of Loaf, The Misfits, or some other $5 cover hipster band.  But what about you guys?