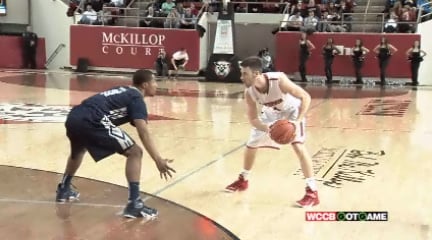 DAVIDSON, N.C. – Jack Gibbs and Brian Sullivan went over the 20-point plateau and Davidson drilled 14-of-28 3-pointers as the Wildcats ran their winning streak to seven straight with a 77-66 victory over George Washington Saturday at Belk Arena.

Jordan Barham finished with 17 points and 9 rebounds, while Tyler Kalinowski also joined his backcourt mates in double figures with 11 for Davidson (21-6, 12-4 A-10), which remained tied atop the league standings with Dayton and Rhode Island.

After the Wildcats used an 18-5 run to take their largest lead of the contest, 67-51, George Washington (18-11, 8-8 A-10) responded with 10 straight to cut the deficit to 67-61, with just under four minutes to play. Following a 30-second timeout, Davidson quickly stretched the margin back to double digits, putting the game out of reach.

Davidson shot just 41.8 percent overall, but converted 17-of-21 from the charity stripe, while turning it over just four times.

The Colonials, who hit 11 3-pointers of their own, held a 39-29 advantage on the glass, but committed 13 miscues, which the Wildcats turned into 22 points at the other end.

Despite shooting just 34.6 percent and a five-minute scoring drought in the opening period, Davidson closed the half on a 9-4 spurt capped off by a Barham putback at the buzzer, to lead 32-30 at the break. Sullivan and Gibbs led all scorers with 12 points each in the opening period.

George Washington finished the second meeting in 10 days at 45 percent (27-60), while only getting to the free-throw line twice.

The Wildcats will wrap up their 2014-15 home slate with a 9 p.m. nationally-televised contest against VCU Thursday evening.