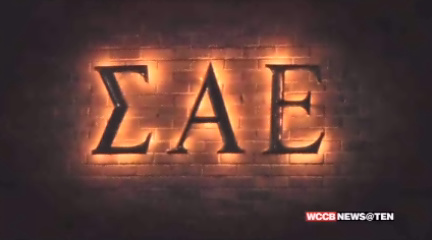 Another student, Andrew James said, “For you to do something like that goes against everything people have worked for for years.”

SAE’S local UNCC chapter declined to comment, but director of Fraternity and Sorority Life, Michelle Guobadia spoke on their behalf.

“They’re equally disappointed in their brothers at OU,” said Guobadia.

The student in the video are celebrating Founder’s Day. The Fraternity was established 159 years ago.

The racist chant went viral Sunday. SAE headquarters immediately closed the OU chapter writing, “We apologize for the unacceptable and racist behavior of the individuals in the video, and we are disgusted that any member would act in such a way.”

“It is one of the quickest reaction I have ever seen a national headquarter ever give to an organization,” said Guobadia “So, that was surprising to see, but it was also refreshing to see an organization take such a strong and swift stand to say this is not who we are.”

UNCC has never cited the local chapter for any violations.

Bloomberg News lists SAE as the deadliest fraternity in the country with at least 10 deaths at SAE events since 2006.

Now, hundreds of thousands of eyes have witnessed the chant, a growing number.

UNCC’s local chapter is organizing a dialogue within its organization as well as with any others that want to join.