Edge on Demand: Do You Care What NFL Players Do Off-Field? 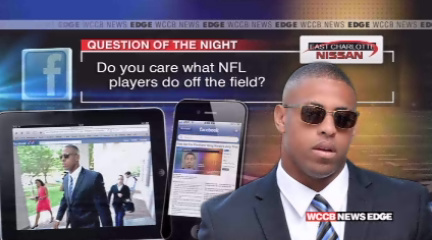 A Dallas sports anchor is ripping the Cowboys after signing defensive end and former Carolina Panther Greg Hardy.  We told you Wednesday night on WCCB News @ Ten that the Cowboys signed Hardy to a one-year deal worth up to $13.1 million.

Hardy was found guilty last July of misdemeanor domestic violence after being accused of hitting his ex-girlfriend.  He appealed the conviction and asked for a jury trial.  Charges were later dropped when his accuser didn’t show up for court.

Fast forward to Wednesday night on a television station in Dallas, sports anchor Dale Hansen starts off his commentary, slamming the Cowboys, saying, “They can’t possibly sink any lower.  They can’t fall from grace any more than they have.”  All this, of course, stemming from the signing of Greg Hardy, who he continued to bash for the remainder of the Unplugged Uproar.

“Greg Hardy’s jersey is being sold at the Cowboys online pro shop now,” he continued.  “You could get one for your sister or daughter and then explain to her that Hardy beats up women, but we’re cheering him now because he’s really good on game day, and game day is all that really matters to me.”

And that brings us to the Question of the Night: Do you care what NFL players do off the field?