Man on the Edge: Should the ‘Naked Man’s’ Actions Be Illegal? 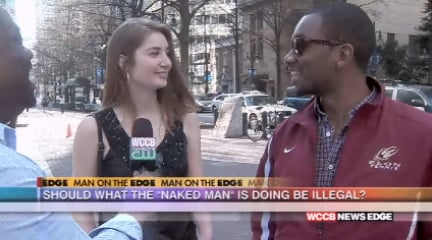 North Charlotte neighbors are fed up over a man they say stands in his doorway… naked.  Police say he’s not doing anything illegal, but how free can you be?  How can you be buck naked, and not be breaking the law?  Neighbors in the Cardinal Glen area met Monday night during an HOA meeting to discuss some of those questions.

We found at least seven indecent exposure police reports, all neighbors saying the man stands in his doorway nude, in his garage, even in the front yard.  Police say it’s legal inside, but no one has been able to catch a photo of him outside.  WCCB Charlotte’s Courtney Francisco spoke with the so-called “Naked Man”, Gerard Leeper, to get his side of the story.

“No one has seen me outside nude,” he said.  “But when you want to paint a picture of someone, you go to the measure of whatever it takes.”

Mr. Leeper says someone could have photoshopped him standing naked in his doorway, but the president of the HOA says that’s not the case.  After the meeting, they decided to offer Leeper a chance to go to counseling before moving forward.

Meanwhile, police say if he does go outside, he will go to jail if the person who sees it testifies in court.  Still, Leeper is not breaking the law by standing in his doorway naked, but should it be illegal?  Rance hit the streets to get your take…