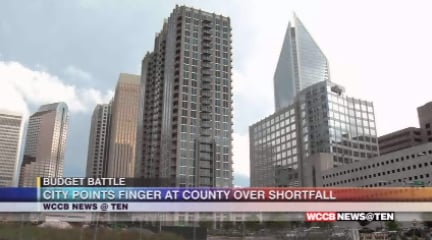 The state’s elimination of the Business Privilege License Tax cost the city $18 million.  And the county’s reworking of a botched 2011 property revaluation will hit the city for $9 million this year, and $14 million in 2016.

City leaders are pointing fingers at the county.  The county says the city should have seen it coming.

“We saw a lot of reductions in value that we really weren’t anticipating,” said Mecklenburg County Manager Dena Diorio.  “So it was really more a question of timing than it was an issue of who’s right and who’s wrong.”

“The natural result was going to be that overall tax valuation would decline,” said County Commission Chair Trevor Fuller (D).  “And so what we’re seeing now is the results of that decline, and we’re all going to have to deal with it.  And maybe the city is having somewhat a little more difficulty with it than we have.”

Both city and county leaders are also concerned with a state senate plan to shift million in sales tax revenues from cities and towns to rural areas.