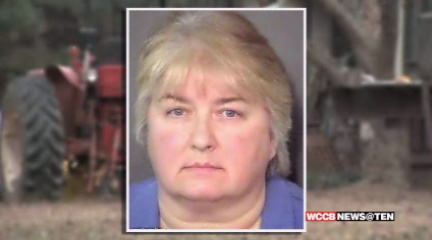 “I can’t believe that she basically got away with it. She’s going to serve minimum time,” says Larson’s daughter-in-law, who didn’t want her name identified.

Under the terms of her plea deal, Larson was sentenced to 6 to 17 months in prison. She’s already served most, if not all of that time after being arrested in November 2013.
“There’s no excuse for that. Not for those kids. Not for everything they went through. Not for everything they had to endure,” explains Larson’s daughter-in-law.
Larson and her longtime boyfriend Dorian Harper are accused of shackling an 11-year-old boy to their front porch, with a dead chicken tied around his neck. Prosecutors say the boy was almost always shackled, day and night, and slept chained to a railroad tie in a bedroom locked from the outside.
But prosecutors and Larson’s attorney blame Dorian Harper for most of the kids’ injuries. “Right from the get-go, it was was obvious that Dorian was the perpetrator behind everything. Her part in it was failure to report,” says Larson’s attorney Bob Leas.
Harper accepted a plea deal about two weeks ago. He’ll spend at least six years in prison. Prosecutors say Larson also got a better deal because she was willing to cooperate.
In the courtroom, Larson used a walker to move around. When she addressed the court, she looked into the audience. Her attorney says she was looking at two of the kids. “I just wanted to tell the children how sorry I am that I did not protect them,” Larson said in court. “I should have done more for you and I didn’t, and I apologize for that.”