Wanda Sue Larson Expected To Be Released Days After Trial 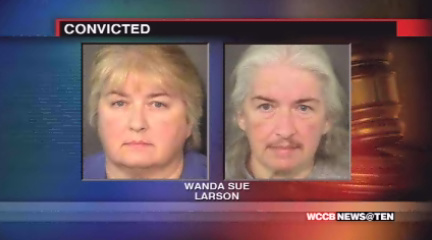 CHARLOTTE, NC — WCCB Charlotte has learned an ex-Union County child protective services supervisor should get out of jail next Wednesday.

Wanda Sue Larson pleaded guilty to child abuse on Tuesday.  Her appearance has changed dramatically since her arrest.  A judge sentenced her to 6 to 17 months in prison.  She’s already served most of that while waiting for trial.

The Union County Sheriff says the Department of Adult Corrections is going over her paperwork and just needs to sign off on time served.  The investigation began after an 11-year-old boy was found shackled to Larson’s porch with a dead chicken tied around his neck in 2013.

Larson’s longtime partner, Dorian Harper, accepted a plea deal last month.  Prosecutors say he abused the 11-year-old victim in a variety of ways, including cutting his face with a knife, shocking him with electrical wires, and twisting his pinky with a pair of pliers.  Harper is serving at least six years in prison.