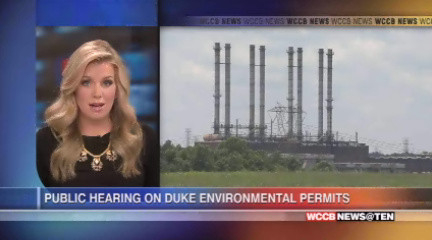 LINCOLNTON, NC — Residents had a chance to sound off Wednesday about their concerns over Duke Energy’s coal ash.  Duke is in the process of reapplying for permits that cover the release of certain metals and other things into its coal ash ponds like the one at the old Riverbend facility.

The State Department of environment and natural resources held a public hearing Wednesday in Lincolnton.  Close to 50 people showed up, and they don’t want the permits renewed.

“The whole thing is about profit.  It’s the profit motive.  They have no interest whatsoever in health, in the public’s interest,” said Lincolnton resident Rosemary Hubbard.

State lawmakers passed legislation requiring Duke to close all of its coal ash plants in North Carolina by 2029.