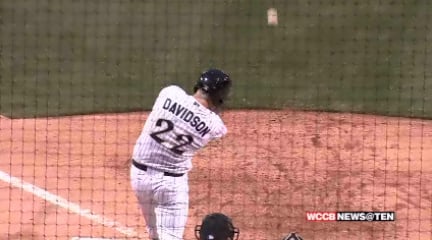 (CHARLOTTE, NC): A crowd of 10,514 fans filled BB&T Ballpark on Opening Knight to watch their hometown Charlotte Knights claim victory over the Norfolk Tides by a score of 6-3.

The Knights used a pair of home runs and a strong effort from their bullpen to come away with their first win of the season.

The Tides would take an early lead when Chris Parmelee – the second batter of the game – hit a solo home run to give the visitors a 1-0 advantage, but the lead did not last for long.

Knights starting right fielder Engel Beltre yanked a homer of his own in the second inning to knot-up the score 1-1.

The hometown Knights were not done in the inning, as Saladino put Charlotte ahead with an RBI-single to left field, giving the team their first lead of 2015. Next up, Leury Garcia extended the lead to 3-1 with a sacrifice fly to center field.

Matt Davidson – who hit 20 home runs as a Knight in 2014 – continued to show off his power with a long homer to left-center field to give the Knights a 4-1 lead in the third.

After the first-inning home run, Knights starter RHP Brad Penny (1-0, 4.76) settled down and cruised through the next few frames, allowing three runs over 5.2 innings pitched en route to the victory.

The Tides added a run in the fifth inning on a broken-bat single by Nolan Reimold, cutting the lead to 4-2. The damage was limited by a great defensive play by Saladino, who started a bases-loaded double play to end the inning.

Charlotte had their lead cut to one in the sixth inning, when Christian Walker doubled and later scored on a Jayson Nix sacrifice fly, but RHP Arcenio Leon would come on to relieve Penny and strike out Michael Alamanzar to end the frame.

Leon, LHP Zach Phillips, and RHP Jairo Asencio were brilliant out of the ‘pen, combining for 3.1 innings of scoreless, no-hit ball.

Penny would get credit for the win, and Asencio earned his first save of the 2015 season.

The Uptown Knights would add a run in the bottom of the sixth, as DH Matt Tuiasosopo led off the inning with a triple and later scored on a Smith single.

A final insurance run was added in the eighth inning when Trayce Thompson scored on a Saladino sacrifice fly.

The Charlotte Knights are back at it on Friday night, taking on the Tides in game two of their four-game set. RHP Chris Beck toes the rubber for Charlotte, while RHP Mike Wright gets the nod for the Tides. First pitch is scheduled for 7:05 p.m. at BB&T Ballpark and gates are set to open at 6:00 p.m.