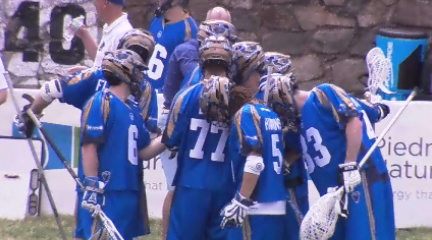 The Charlotte Hounds on Sunday afternoon opened their 2015 season at American Legion Memorial Stadium with a 10-9 overtime loss to the Rochester Rattlers. It marks the fourth straight MLL season the Hounds have opened at home with a loss. Rattlers attackman Jordan Wolf was named Coca-Cola Player of the Game following a four-goal performance, including the game winner in OT. Meanwhile, the Hounds were lead by Mike Sawyer with three goals.

James Carroll won the opening draw for the Rattlers, and Wolf scored his first of the game off a rebound just 50 seconds into the quarter. After several errant passes by the Hounds, rookie Josh Dionne finally found Terry Kimener in front of the cage to tie the game. Four minutes later Dionne scored one of his own to put the Hounds in front 2-1. But the Rattlers dominated the rest of the quarter, scoring three straight, including a power-play goal from Wolf and two tallies from Dave Lawson.

Both goalies — John Galloway for the Rattlers and Pierce Bassett for the Hounds — stood on their heads to start the second quarter as the first 5:24 went scoreless despite numerous shots on goal. After Galloway had made two initial saves, Alex Zomerfeld found the loose ball and flicked it to defenseman Mike Ehrhardt who ripped it to the back of the net to pull the Hounds back within one. The teams then traded two goals each, as Jeremy Boltus scored back-to-back for the Rattlers and the Hounds closed the half with tallies from Jake Tripucka and John Haus.

Just over five minutes had ticked away in the third quarter when Sawyer scored his first of the day — faking Galloway high and scoring low — to tie the game at six. After another eight scoreless minutes it was the Hounds who struck again, as Kimener fired one past Galloway to give the home team a 7-6 advantage. Bassett had five saves to shut the Rattlers out in the third.

Sawyer kept things moving for the Hounds at the start of the fourth. He faked a two-point shot, stepped up, beat his defender and scored to put the Hounds in front 8-6. But the Rattlers scored two in a row over the next three minutes to set up a tied game with just under nine minutes to play. It would be Sawyer again who scored the go-ahead goal for the Hounds, beating three Rattlers defenders for a 9-8 advantage with 1:43 remaining in the game. But a holding penalty called on Brett Schmidt with just six seconds to play proved costly, as Boltus notched his third of the night to send the game into overtime.

Brendan Fowler had been dominant at the faceoff X all day (16-22), but it was Carroll who gutted out the opening draw in OT. Bassett made the initial save on the Rattlers’ first shot attempt, but Wolf was in front to bury the rebound and win the game. Bassett finished the game with 17 total saves.

The Hounds will have a bye next week, giving the team time to correct all the little mistakes on display in the season opener. They will be back in action onApril 26 for a road game with the Boston Cannons at Gillette Stadium in Foxboro, Mass. Faceoff is scheduled for 4:00pm and the game will be available live on ESPN3.