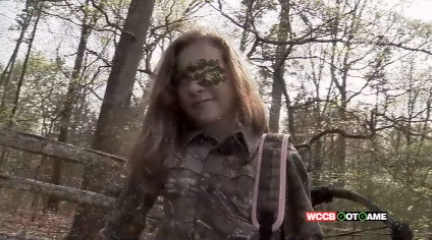 CHARLOTTE, NC (WCCB) — It was a re-union at BB&T Ballpark for the Thompson family of Kannapolis and White Sox first baseman Adam LaRoche when the team played an exhibition versus the Charlotte Knights in early April.

LaRoche and the Thompson’s daughter, 11-year old Angel — who is battling brain tumors, share a passion for the outdoors.

“She was way more motivating to me than I was to her,” LaRoche said about meeting Angel Thompson.

Angel has had two brain surgeries and 18-months of chemo-therapy.  There are currently two tumors in Angel’s head that are in-operable due to the placement of the tumors.

LaRoche was contacted by the Dream on Three Foundation to help grant Angel Thompson’s wish. Angel, an avid hunter, had a dream to hunt with a professional and, in particular, with the hunters on the Outdoor Channel show “Buck Commander.”

Adam LaRoche, co-owner of the show, made the wish a reality.  He opened up his ranch home in Kansas and treated Angel and the Thompson family to a weekend of hunting and fellowship in January.

“No, we don’t want cancer in our lives,” Angel’s mom, Myra Thompson, said. “Is cancer okay. Yeah, It’s been okay because of these opportunities of people coming forward and doing this.”

Angel bagged a 13-point buck with her cross-bow on the unforgettable trip.

“It turned into more than just a hunt,” Angel’s dad Alan said.

The families have kept in touch and plan on hunting again in the future.