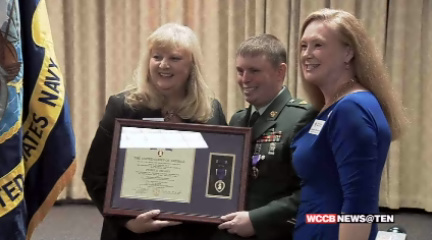 SALISBURY, NC – A Stanly County man who survived the 2009 attack at Fort Hood is being recognized Saturday night for his heroic actions more than five years ago.

Former Army Sergeant Matthew Cooke was given the Purple Heart  at the VA Hospital in Salisbury.
Cooke took several bullets while saving a fellow soldier in the attack that left 13 people dead and more than 30 wounded.
“It took long, yes. It took long to go from a work place violence to a terrorist attack but yes I’m just happy to get the award,” said Cooke.
In 2013,  a jury convicted former Army psychiatrist, Major Nidal Hasan, for the Fort Hood shooting.