Enjoying the Coolest Summer Ever with Wilson at Walt Disney World 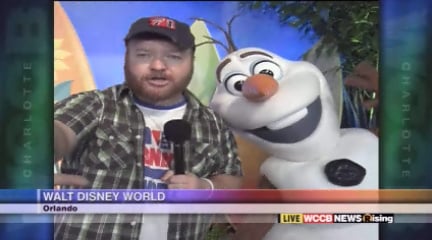 CHARLOTTE, N.C. – Wilson took his show on the road today where he traveled to Orlando, Florida and Walt Disney World.  He was kicking off the Coolest Summer Ever with Olaf, Mickey and Star Wars.  He was giving Krisine, back in the studio, a lesson on one of the best animated Disney movies ever, Frozen.

Wilson also had a touching segment for Syndey, a young friend of his in Charlotte, that has been fighting a serious personal battle.  Good luck and congrats to her.

All summer long the park will offer great packages and special activities for the whole family.  The Magic Kingdom will open with a big kick-off event and  will be open 24 hours a day during Memorial Weekend.   Disney has been working hard to make sure their park visitors enjoy their experience and have a great time.

To celebrate the opening of the newest Star Wars movie on May 4th, every weekend beginning May 15 through June 14, 2015 Star Wars Weekends will be happening at Disney’s Hollywood Studios.  Wilson even received his own lightsaber and officially became a Jedi Knight.  If you are a Star Wars fan, this is something you will not want to miss.

The summer only gets better on June 17th, at the Disney’s Hollywood Studios with the Frozen Summer of Fun Live Experience with parades, sing-alongs and fireworks.  Anna, Elsa, Kris and Olaf will all be there.