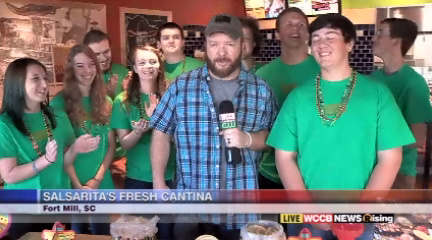 FORT MILL, S.C. – Wilson was at Salsarita’s Indian Land  in Fort Mill today joined by their CEO Phil Friedman to celebrate Cinco de Mayo.  They were also joined by a group of kids from nearby Indian Land High School for an “eat til ya pop” taco eating contest.  And boy, could those kids put away some tacos early in the morning in only one minute.  Congrats to Cole for winning the contest

Charlotte based Salsarita’s has always played a big part in giving to the communities where they are located and the Ft. Mill location is no different.  Indian Land High School has been a recipient of Salsarita’s community effort having received donations from the restaurant to purchase band equipment as well as other fund raising events.

Another organization that works with Salsarita’s is the Salvation Army of Greater Charlotte.  Phil and Wilson were joined by Shelly Henderson when Phil presented a check to Shelly for the veteran’s wing at the Center of Hope Shelter of the Salvation Army.

Salsarita’s has been working hard rolling out new designs in their locations.  The Fort Mill location was the first one to have the new design.  They are also expanding into other areas of the south, opening new locations in Alabama, Mississippi and Texas.