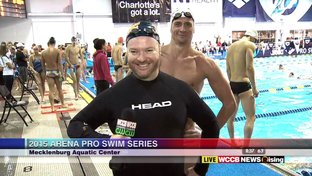 CHARLOTTE, N. C. –  Wilson was at the Mecklenburg Aquatic Center with swimmers from SwimMAC Carolina who are participating in this year’s Arena Pro Swim Series.   He dressed for the occasion, which was of course, not proper dress.

In his younger day Wilson was a pretty good swimmer, so he took to the pool to dust off his butterfly stroke.  Remember…swimming is what he is aiming for here…definitely not diving into the pool.   It was a belly flop contest between Wilson and swimmer Tyler Clary.  Tyler is known for his winning belly flops.

After Wilson took the “plunge” into the pool, and showed off his swimming skills,  he met up with Olympic Gold Medalist, Ryan Lochte, who now calls Charlotte home and trains at the Aquatic Center.   Ryan  talked with Wilson about why he enjoys living in Charlotte and training at the center.  It was a conversation and video that will go down in Wilson’s World history.

This year’s 2015 Arena Pro Swim Series continues today through Sunday at the Mecklenburg Aquatic Center.  Swimmers from all over the world are competing in the event.  The road to the gold at the Olympics goes through Charlotte as some of the best swimmers in the world compete in Charlotte on their way to the Olympics.

Wilson also talked with Olympic swimmers  Kirsty Coventry and Tyler Clary who are competing in the Arena Pro Swim Series. Tyler, like Ryan, moved to Charlotte a little over a year ago and trains at the Aquatic Center.

The Mecklenburg Aquatic Center is working hard now to improve and enlarge the facilities to continue to supply a training facility that will provide future Olympic swimmers.