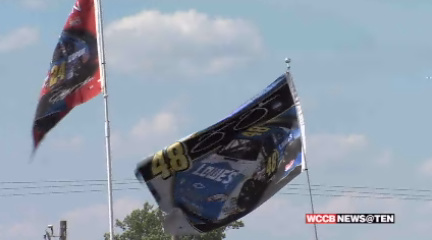 CHARLOTTE, NC — Final preps are underway in Uptown Charlotte for Speed Street.  The three-day festival kicks off on Thursday.

Parts of Tryon Street and MLK Boulevard are already closed, and we’ve seen crews setting up the main stage near the NASCAR Hall of Fame.  The event leads up to Sunday’s Coca-Cola 600.  We caught up with fans checking out Uptown.

“We’re here for the Coca-Cola 600,” said one fan.  “We just went to the NASCAR Hall of Fame for the first time.  We’re from California.”

“Charlotte, it’s the nicest people here,” said another fan.  “They got the best people in Charlotte!”

Speed Street has been declared an “extraordinary event”.  That gives police more authority to control crowds and keep people safe.

Hundreds of thousands of fans will attend race week events from Uptown to the Speedway.  The “10 Greatest Days in Racing” brings fans from all 50 states and beyond to the Charlotte area.

Many make the trip year after year, bringing their motor homes, and their money, to enjoy all the area has to offer.

“We’re all over Charlotte,” said Maryland resident Dana Salkeld.  “We’re up in Mooresville at the go-kart track.  We’re over at the lake, Lake Norman.  I was down on Lake Wylie today.  Went and had lunch at a little place called T-Bones on Lake Wylie.”

“We’ve been down here Monday to Monday,” said John Latimer, also a Maryland resident.  “Go back home Memorial Day, and you know we continue to do it.”