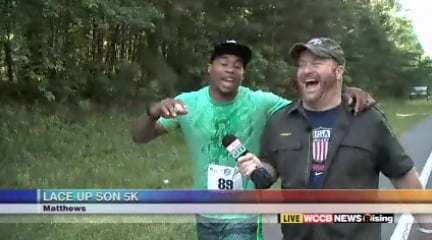 After Wilson had the honor of kicking off the race live on Rising, he took off in a golf cart to try to catch up with Steve as he ran the 5K.  Seems the golf cart almost wasn’t a match for Steve’s fast feet.  But, Wilson finally caught up with him and after Steve tried to commandeer the cart, he talked with Wilson about  the mission and focus of  S2F2 and how important the foundation is for him.

Apparently the run took a little more out of Wilson that it did Steve.

The Steve Smith Family Foundation began their annual Lace Up Son Family 5K last year and again this year the event will continue to help raise funds for area YMCAs such as the Siskey, Simmons and Johnston YMCAs as well as the Special Olympics of North Carolina as well as other organizations.

The Lace Up Son 5K began at  8am taking participants through the streets in Matthews and concluded at Stumptown Park.  The day will continue to be a family friendly event celebrating Memorial Day and current and veteran members of the military.