Get Your Motor Running with Wilson at Harley-Davidson of Charlotte 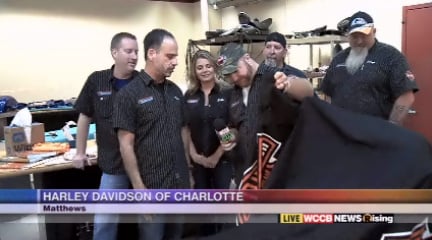 Wilson was able to get a sneak peek at the bike, but had the hammer come down on him when he tried to unveil the bike to the viewers.

Stay connected with Harley-Davidson of Charlotte on Twitter at @HDofCharlotte or Facebook at facebook.com/HDofCharlotte to get sneak peeks of the customized bike.  The big unveil of the Custom Kings bike will be held on Friday, June 26th at 7pm at McCoy’s Smokehouse, 4630 Old Pineville Road in Charlotte.