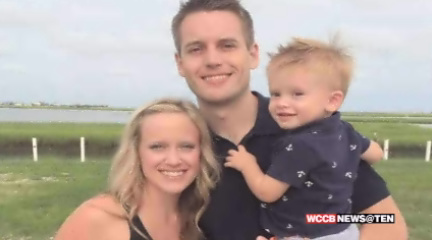 UPDATE: Officials say the newborn child who was delivered via Cesarean section after the accident has passed away.  Gentry and Hadley Eddings are both recovering from the injuries they sustained during the wreck.

People from across America are helping the family by donating money to a Go Fund Me account. Click HERE to donate money for medical and funeral expenses.

CHARLOTTE, NC — The delivery truck driver who troopers say caused the crash Saturday that killed a two-year-old Charlotte boy is out of jail.

The Eddings family was on Highway 17 in Pender County when the truck crashed into one of their vehicles.

“As a mom, obviously, trying to imagine the days ahead of her not having her baby, so that’s the hardest part for me,” said Holly Heffernan.
Heffernan says her friends, Hadley and Gentry Eddings,  were leaving his sister’s wedding in Wilmington, NC in the afternoon.
Eight months pregnant, Hadley and her two-year-old, Dobbs, were in one car.
Gentry was in another car behind them at a stoplight on Highway 17 in Hampstead when Highway Patrol says a local seafood delivery truck driver did not slow down at the light and hit Gentry’s car.
Investigators say that caused a chain reaction that sent the mother to the hospital for an emergency delivery of her unborn child. The family’s two-year-old didn’t make it.
“How could you not be cautious knowing the heavy piece of equipment you’re operating?” said Heffernan.
Troopers say the delivery truck driver was Matthew Deans. The 28-year-old faces one charge of misdemeanor death by vehicle.  Family says the newborn is still in critical condition from the crash trauma.
Deans and his employer did not return calls for comment.
The Eddings work at the South Charlotte Forest Hill Church.
In 24 hours, members raised more than $50,000 for medical and funeral expenses.
“I’m still in shock,” said Chassity Carson. “It just goes to show you how much that they reached out to everyone on in our community.”
Click HERE to donate money for medical and funeral expenses.