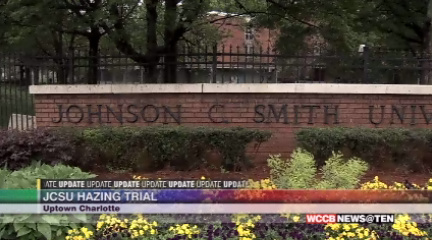 CHARLOTTE, NC — Two fraternity brothers have been found not guilty of hazing a pledge at Johnson C. Smith University.  A judge ruled Monday that there wasn’t enough evidence to connect the hazing to the chapter of Omega Psi Phi.

Instead, Edward Alexander and Patrick Philogene were found guilty of simple assault.  They were sentenced to six months probation and 48 hours of community service.

“This was a situation where there were certain things that the judge found they didn’t prove beyond a reasonable doubt,” said the brothers’ defense attorney Norman Butler.  “And that’s what happened to the hazing charge.”

The pledge testified he was seriously injured after being paddled and hit back in January.  Three other fraternity members arrested took plea deals.  Another had his case dismissed.