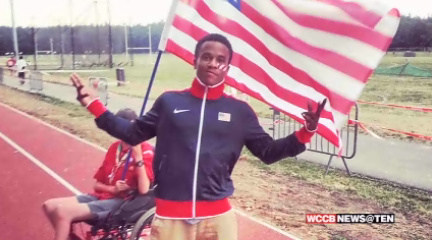 CHARLOTTE, NC — A Charlotte Paralympian is pleading with thieves to return his stolen prostheses and medals.

It’s just weeks until Paul Peterson’s next race that could lead to the Paralympics, but thieves who stole his blades have brought him to a screeching halt.

“Just give me back my legs so I can do what I need to do,” said Peterson. “I can’t sprint without them. Running is what I do. That’s how I feed my daughter.”
Peterson was a 15-year-old West Charlotte High School football player when a motorcycle crash took his right leg.
Four years later, his Prosthetist, Clay Claiborne, pushed him to run.
“I knew there was something special in him,” said Claiborne.”How he ran, how he wore his prosthetic.”
He ran so fast, in a matter of two years, he made Team USA for the Paralympics.
Now it’s all on the line with Wednesday afternoon’s break in.
The burglars broke in through his back door, stole his electronics, his running blades, his Olympic jackets and medals.
“I pride myself on my medals, and I earned them, you know? Blood, sweat and tears,” said Peterson.
He reached out to the only person he knew could help: Claiborne.
“He was upset, but he was calm,” said Claiborne. “Then he said, ‘They took my medals.’ and that’s what really got me upset.”
Peterson competes in four types of races: 100 meter, 200 meter, relay and long jump. He needs four different prostheses. Thieves stole three of his.
It will take weeks to make a new prosthetic. That means Peterson might not race in the National Championships this month that would qualify him for the Parapan Am Games which lead to the Paralympics in Rio in 2016.
No one can use the prostheses because they are made to fit Peterson, and the medals have little value besides sentiment.
“All the grinding I did, and just for it to be taken away like that, you know, it hurts,” said Peterson.
Police say whoever did this can drop the legs off anonymously at a police station or drop them off at the apartment complex where Peterson lived.
If you know who did this, you can call Crime Stoppers and receive a cash reward.