The Edgitators: Should Magistrates Be Able To Refuse Performing Marriages? 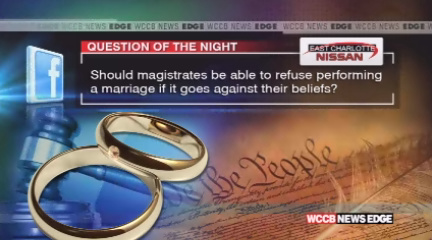 Discriminatory and an operational headache: that’s what Mecklenburg County’s Head Register of Deeds calls Senate Bill Two.  The House denied the Governor’s veto Thursday, which means by law, government employees can now opt not to provide marriage licenses or perform ceremonies to same-sex couples based on religious beliefs.

“It’s discriminatory,” said Mecklenburg Register of Deeds David Granberry.  “We’re saying that our staff can discriminate against different people, although to make it look better, they have to totally recuse themselves from that entire job function.”

So what do you think?  Should magistrates be able to refuse performing a marriage if it goes against their beliefs?  The Edgitators weigh in…