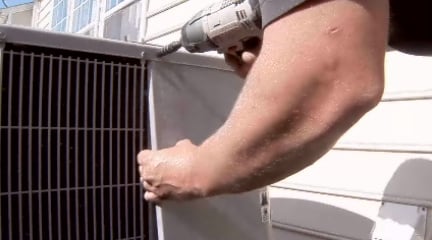 As of Tuesday, air conditioner repairmen were all over the city trying to restore cooling in homes.

“I was like, ‘No! Not now.’ But of course, that’s when it always happens,” said Linda Shanock. “I think, the worst time in the world for it to happen.”
Outside her home was 100 degrees. Inside, the temperature was 88 and climbing.
She’s one of thousands in the city waiting for a repair.
“If this weather doesn’t break, we will be running behind constantly.”
Mike McAndrew, owner of Andy Lewis Heating and Air Conditioning, says 80 employees are working hundreds of service calls. On a normal summer day, they’ll receive 30 repair calls.
AC units are breaking, he says, after running constantly to battle the heat wave. Waiting for a repair can be dangerous for the elderly and children.
“So, we’re trying to get to all those people as soon as possible because they’re the ones who need it most,” said McAndrew.
A fix can cost anywhere from $80 to $500, depending on what’s broken. McAndrews gives two pieces of advice to save you money and sweat: change your filter and don’t fluctuate the thermostat in an effort to save money.
“Leave it alone, and let it run through the night because that will help it catch up,” said McAndrew.