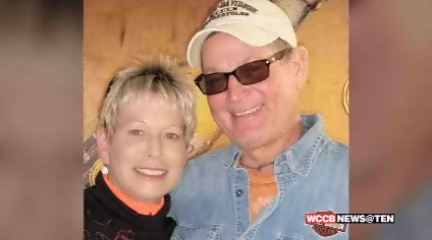 UPDATE:  Investigators say Randy Moore shot and killed his wife Anna, her son Jason Lockamy and his girlfriend, Lora Young before he turned the gun on himself.

YORK COUNTY, SC — A Rock Hill community is waiting for closure after a quadruple shooting Sunday.

Police found Assistant County Manager Anna Moore and her family dead in her home, but are not looking for a gunman.
Deputies were gone Monday, but neighbors were questioning who killed Moore, her husband Randy Moore, son Jason Lockamy and his girlfriend, Lora Young.
“It’s really just hard,” said Ray Hamilton. “I feel weird just coming home for some reason.”
Hamilton thinks he heard the gunfire that killed his neighbors. Deputies later surrounded the home. The Coroner pronounced the four dead Sunday.
Pastor of a nearby church Jonathan Pannell let the family’s relatives into his church that night. He started a memorial outside the home Monday.
“It’s very devastating to lose any particular part of your family, and to loose four members of a family so closely, I couldn’t imagine what they’re going through, what’s going through their minds,” said Pannell. “But it’s important for all of us to lift them up.”
Anna Moore has worked for the county for a decade. County Manager Bill Shanahan says she had two grandchildren, a daughter and her son who also died.
“After ten years, you know, you have something like this happen, and part of your family is gone,” said Shanahan.
Investigators won’t release the 911 call that tipped deputies off to the murders until they piece together more evidence.
“I felt helpless that would happen so close to home,” said Hamilton. “If I would have even known or had an inkling of anything going on, I would have went out of my way.”
Deputies do say the quadruple shooting was isolated and neighbors are in no danger.