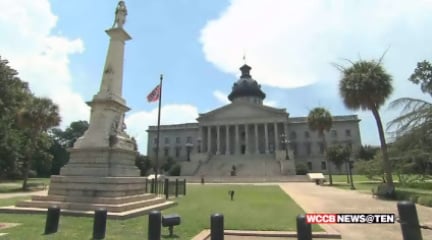 COLUMBIA, SC – Lawmakers moved another step closer Monday to removing the Confederate Battle Flag from the South Carolina State House grounds. A bill in the Senate could go on to the House of Representatives as early as Tuesday.

After long and sometimes emotional arguments, Senators voted during a second reading, to continue with a plan to move the Battle Flag to the nearby Confederate Relic Room.

“It’s time for us to put this behind us. And we need to be more about the future, not about the past,” said Sen. Larry Martin.
“We can put our differences aside. And do something that I think’s gonna help South Carolina move forward,” said Sen. Chip Campsen.
It wasn’t without opposition though.  Two Upstate lawmakers put forward amendments including flying a different version of the flag or only flying it on Confederate Memorial Day.
Senator Lee Bright proposed taking the issue to a referendum so voters could decide.
All the proposals failed.
“We’re gonna disrespect these 20,000 plus men, black and white, that fought to defend their state!” Bright said on the Senate floor.
Outside, rallies continued around the Confederate Monument. The Rev. and South Carolina native Jesse Jackson stopped to talk with flag supporters.  He says he’s optimistic it will come down.
“The war began in South Carolina, Fort Sumter. We could very well be seeing the beginning of the end today,” Jackson said.
Senator Vincent Sheheen, who sponsored the bill, says it could still face challenges in the House.
“Different people, who represent smaller numbers, smaller districts. So you never know exactly which way they’ll be pulled,” Sheheen said.
But with Monday’s vote, he says the momentum may be difficult to stop.
“It sends a message to the elected leaders in South Carolina that it’s time to come together,” he says.

"Love Is Blind" Casting in the QC

Do My Job: NC DOT