LOUISVILLE, K.Y. — Ty Jerome’s 3-pointer was memorable not only for its timing, but because it marked one of the few Virginia made against Oregon.

Jerome gave the Cavaliers a three-point lead with 3:34 remaining, and then they used their trademark defense to smother the Ducks and make it stand.

No. 1 seed Virginia reached its second regional final in four years with a 53-49 victory over 12th-seeded Oregon on Thursday night in the NCAA Tournament. The Cavaliers face third-seeded Purdue in the South Regional finals Sunday for a trip to the Final Four. 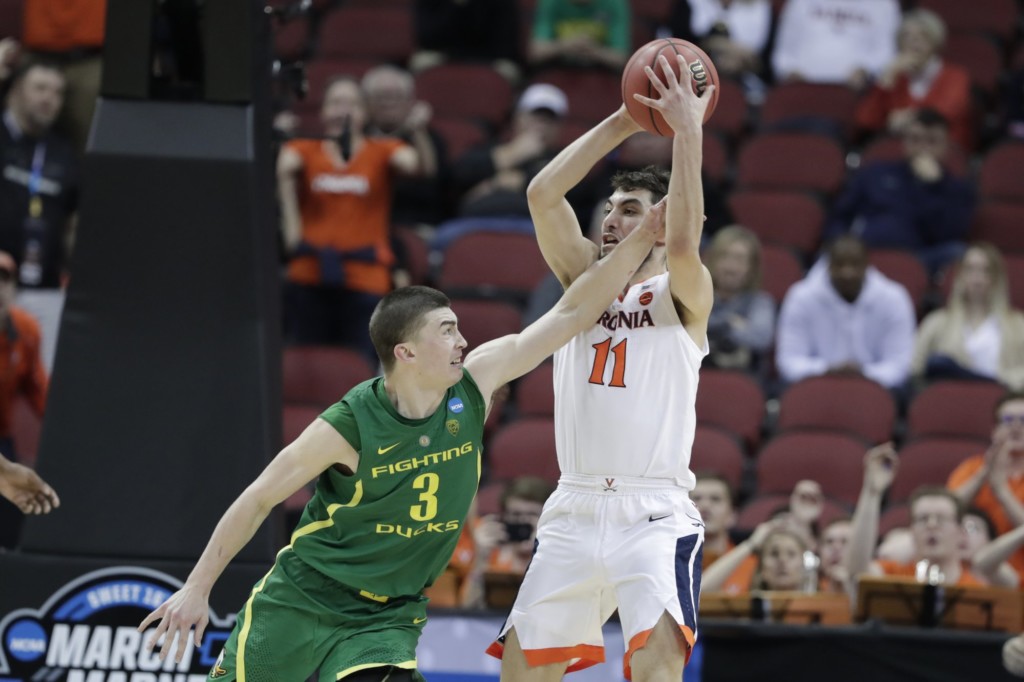 The Cavaliers (32-3) shot 36 percent and matched a season low in scoring, but got baskets when needed to outlast the Ducks (25-13). Jerome’s 3 was the biggest as he took Kihei Clark’s pass and converted from deep to make it 48-45.

A follow-up from behind the arc would have been even better for the junior guard, who obviously wanted breathing room in a tight defensive game.

“Honestly, right now I’m just thinking about the one I missed after that,” said Jerome, who scored 13 points and made 3 of 8 from long range and 5 of 12 overall. “That would have really sealed the game.”

Virginia clamped down from there holding Oregon scoreless for more than five minutes after the Ducks went ahead, 45-42, on Louis King’s 3 with 5:43 left.

Clark tied it with a 3 with 5:21 left and De’Andre Hunter got free for a layup for 24 seconds left for a five-point edge that was enough to stop Oregon’s 10-game winning streak.

“At times we struggled,” Virginia coach Tony Bennett said, “but we made enough offensive plays and certainly rallied defensively.”

Most important for Virginia was moving a game closer to its first Final Four since 1984. That goal seemed shaky as the Cavaliers had to rally past No. 16 seed Gardner-Webb in the first round, but they recovered to win that game before beating Oklahoma.

Oregon presented a completely different challenge. The Ducks were on a roll and winning big thanks to a lineup featuring four 6-foot-9 starters, but the Cavaliers kept them from being a factor to reach the regional final.

“I mean, it’s definitely a milestone for us,” Virginia guard Braxton Key said. “But we’re not done yet.”

Clark finished with 12 points, six assists and four rebounds. Diakite grabbed 11 rebounds as Virginia edged Oregon 34-31 on the glass and held the Ducks to 38 percent shooting.

King’s 16 points led Oregon, while Payton Pritchard had 11 and Paul White 10. The Ducks had hoped to reach their third Elite Eight in four years but struggled all night to score — especially down the stretch.

“They make a lot of people take bad shots,” coach Dana Altman said. “But we didn’t handle that very well.”

Oregon’s loss denied Altman from becoming the program’s winningest coach. He entered the game tied with Ernie Kent at 235 wins but must wait until the Ducks’ season opener for another chance to stand alone.

Diakite and Oregon reserve guard Ehab Amin were each called for technical fouls following a second-half confrontation under Virginia’s basket. Diakite swung around several times to get defenders off him, but ended up in a staredown with Amin, who suddenly fell to the floor in an apparent flop.

Virginia held an opponent below 50 points for the 11th time this season. … Oregon’s bench outscored Virginia 8-0, all by Amin.

Oregon: After beating opponents by an average of 18 points during their run, the Ducks were slowed down and then shut down by Virginia. They made just 9 of 25 from long range and were caught off guard defensively several times as Virginia found its post men inside and topped the Ducks 18-14 in the paint.

Virginia: The Cavaliers continued their mastery at the KFC Yum! Center, winning their fifth consecutive visit. This one wasn’t pretty, but it was effective. And they didn’t need a big game from Hunter, who scored 26 points to beat Louisville 64-52 here last month.