We are learning more about a CMPD officer accused of making children drink alcohol. Police say the children are one and six years old.

The children are okay and safe tonight, police say.

Instead of arresting the officer, CMPD gave him paperwork to show up for his court date.

Hurting children would be one of the ultimate betrayals of an officer’s oath to protect those who are vulnerable.

“We are still investigating and collaborating with the DA,” said Dep. Chief Gerald Smith. “I will tell you that Mr. Milton was in control of the alcoholic beverage and also its container the entire time.”

You may recognize Officer Milton from the Charlotte-Douglas Airport.

He’s worked for the city for seven years.

This afternoon, police served their co-worker a criminal summons to show up in court for two counts of child abuse.

“Police say the abuse was happening at a home in a neighborhood on Far West Dr. The police report says Officer Milton was the father of the one year old child. His girlfriend was the mother of the other child.

Police say the mother reported the abuse two days ago.

He will go in front of a disciplinary board here at CMPD, give his side of the story, and that board will decide if he keeps his job.

Right now, the District Attorney’s Office has the case details and the officer will have his day in court. The date has not been set.

CHARLOTTE, N.C. — Detectives say they charged a Charlotte-Mecklenburg Police Department officer with child abuse after he reportedly provided alcohol to two children, according to a news release. 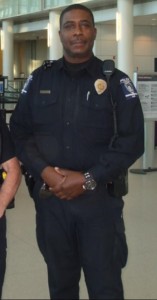 Investigators say they received information on May 15th that Milton provided alcohol to a six-year-old and a one-year-old.  Milton is the biological father of one of the children and was in a prior relationship with the mother of the other child, according to a news release.

Milton, who is assigned to the Airport Division, has been placed on unpaid administrative leave.  He has been employed with the CMPD since May 7, 2012.

“I am disappointed by this incident. As we honor the men and women in law enforcement this week, it is important that the community understands the overwhelming majority of police officers serve with integrity. Officers who betray their oath and break the law will be held accountable for their actions.”

Deadly Storms Tear Through The Carolinas, Leaving Trail Of Destruction