CHARLOTTE, N.C. (GOCHECKERS.COM) – It took more than the 60 minutes of regulation to decide Game 6, but a thrilling winner from Morgan Geekie in double overtime clinched the series for the Checkers, sending them to the Calder Cup Finals for the first time in franchise history.

Just under two minutes into the second overtime, Geekie crashed the crease after Steven Lorentz had thrown a second-chance shot and redirected the puck past Toronto netminder Kasimir Kaskisuo, sending the record crowd at Bojangles’ Coliseum into a frenzy.

It took nearly a full period for either side to light the lamp, but Patrick Brown broke the ice in the final 10 seconds of the first by finishing off a feed from behind the net by Martin Necas. Clark Bishop would net another shorthanded tally for Charlotte early on in the second to double the lead, but things would tilt in the Marlies’ favor from there.

Toronto scored less than a minute after Bishop’s marker, then the visitors would tack on another two straight to claim their first lead of the contest. Charlotte’s captain would claw his team back into a tie before the second buzzer, however, firing a shot from the slot that found the back of the net and set the stage for overtime.

Alex Nedeljkovic turned in a stellar performance in his return to the crease, making 43 stops and helping his team kill of eight of a staggering nine power plays by the Marlies.

Coach Mike Vellucci on the win – “It’s pretty wild, to be honest with you. It’s pretty draining. It was really hot in the building and we were down to nine or 10 forwards for most of it because we got some injuries and illnesses again. A great job by the penalty kill again – guys were warriors on that, we scored shorthanded and our own power play goal was a big difference.”

Morgan Geekie – “Lorie made a great play getting the puck to the net and I just kind of put my head down and went there and good things happened. Guys are getting tired and you never know what’s going to go in. We’re all going to the net, crashing and banging and trying to do our best to put pucks on the net. We’ve got a lot of guys in that room that stepped up tonight and it was a great team effort. Everybody knows what’s on the line and none of us wanted to come back and play Tuesday. We got a full effort up and down the lineup.” 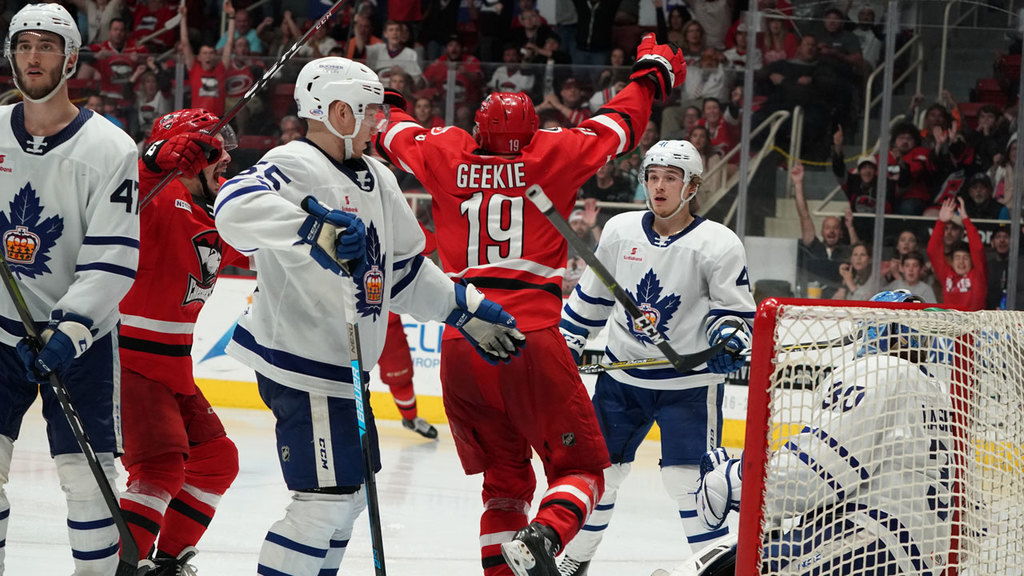 This is the first Calder Cup Finals appearance in team history … The crowd of 8,393 was the team’s largest of the season … Geekie had two points and now ranks fourth among all skaters and first among rookies in playoff scoring … Bishop’s goal was the Checkers’ fourth shorthanded goal in their last three games. Prior to that, their most recent shorthanded goal was on Dec. 31, also against Toronto … The Checkers went 25-for-29 on the penalty kill against the Marlies, who entered the series with the best power play in the playoffs (40 percent) … Bishop has goals in consecutive games, which are his only points of the playoffs … Brown’s goals gave him eight points (4g, 4a) in six AHL playoff games. He led all Checkers with seven shots on goal … Tonight’s penalty shot was the first of this season’s Calder Cup Playoffs … Prior to tonight’s attempt, Nedeljkovic had stopped all three penalty shots faced in his career, all of which took place this season. The last time any Checkers goalie allowed a penalty shot was on Dec. 22, 2016 … The Checkers were out-shot 28-11 in the last two periods of regulation … Defenseman Dan Renouf missed the game due to injury … Forwards Scott Davidson, Stelio Mattheos, Jacob Pritchard and Zack Stortini, defensemen Dennis Robertson and Bobby Sanguinetti and goaltender Jeremy Helvig were healthy extras.

The Calder Cup Finals start Saturday, June 1, at 6 p.m. against either Chicago or San Diego. Tickets go on sale Tuesday, May 28th – more information can be found on gocheckers.com.