CHARLOTTE, N.C. — The Panthers kicked off mandatory minicamp on Monday morning and all eyes were on their starting quarterback.

As expected, Cam Newton threw publicly for the first time in nearly six months as he continues to comeback from shoulder surgery.

The QB was limited. While Newton threw about 30 passes, most were controlled, targeted throws to stationary teammates. He did not participate in team drills, which feature the offense against defense.
Newton is also working on his throwing motion in hopes of picking up where he left off last year, before suffering the shoulder injury.

Panthers head coach Ron Rivera says the goal is for Newton to return to using the mechanics he showed early in the 2018 season. 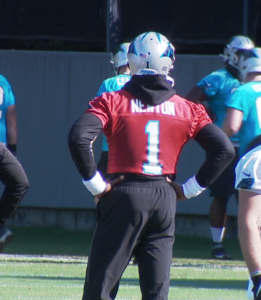 “If you go back and look at some of the things that happened earlier in the year before the shoulder injury, you can see the improvement, you can see the footwork and the development,” Rivera said. “When the shoulder started to go, then you saw everything just kind of fall  to the wayside. Now he has an opportunity to go back, rework those things and do the things he needs to improve.”

The head coach said he’s excited about his quarterback, but Cam still has time before he is full-go.

“This is all part of the the process, he’s going through the steps in his recovery,” Rivera said. “I’m very pleased with him, I really was.”

The Panthers will wrap up their 3-day minicamp on Thursday in Charlotte.