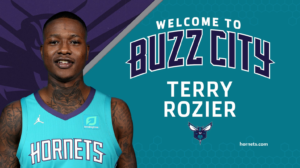 “I’d like to thank Kemba once again for all he did for our franchise during his eight seasons in Charlotte,” said Kupchak. “Kemba is a true competitor on the court and a class act off of it. We wish him nothing but the best in the future.”

Kupchak added, “We’re excited to be able to acquire Terry in this sign-and-trade deal. He is an up-and-coming player who has shown continued improvement in his four NBA seasons, and we believe he can take that next step as a starting point guard in this league. We’re glad to have him join our team.”