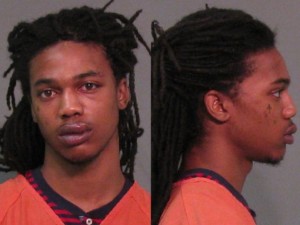 Clinton pleaded guilty to Voluntary Manslaughter and Possession of a Weapon During a Violent Crime. He was sentenced to 20 years in prison.

Clinton is one of two suspects accused in the deadly shooting of 22-year-old De’Mon Davis.

On Saturday night, officers arrested 21-year-old Anquante Watts and charged him with Accessory After the Fact of Murder. On September 9th, police charged Jackel Marquise Clinton, 22, with Murder and Possession of Weapon During a Violent Crime.

According to investigators, Watts was at the scene when the deadly shooting took place. Watts reportedly drove Clinton from the scene to help him avoid arrest.

The shooting happened around 4:41pm on Friday, September 7th in the area of Tom Hall Street at Sanders Street. Davis, 22, was reportedly found lying in the street and pronounced dead at the scene after responding officers tried to give aid.

According to witnesses, the shooting resulted from a physical altercation between the Clinton and Davis.