RALEIGH, N.C. (AP) — A former North Carolina NAACP leader has softened his denial of sexual misconduct accusations, saying that while he never intentionally harassed anyone, he realized his actions “may have been received as sexual.” 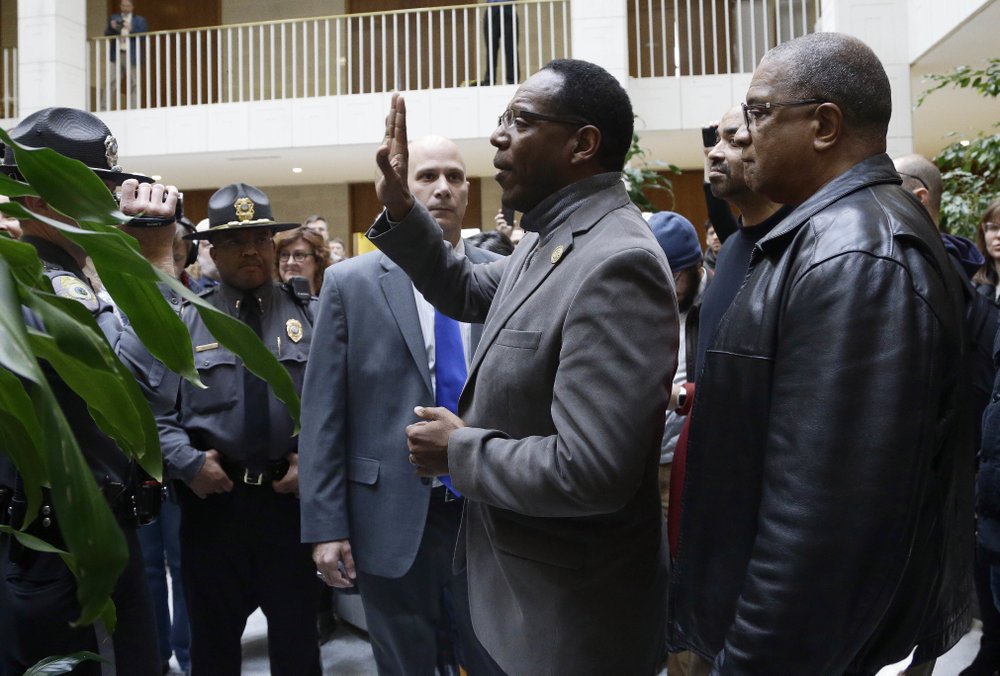 FILE- In this Dec. 15, 2019 file photo, Rev. Curtis Gatewood, with the North Carolina chapter of the NAACP raises a hand as he is confronted by General Assembly police at a demonstration during a special session of the North Carolina Legislature in Raleigh, N.C. In a written statement to The Associated Press Tuesday, Oct. 1, 2019, Rev. Gatewood said he never intentionally harassed anyone. He realized his actions “may have been received as sexual.” (AP Photo/Gerry Broome, File)

In a written statement to The Associated Press, the Rev. Curtis Gatewood said he was “deeply sorry” for the way his actions were perceived. While denying any kind of sexual assault or intentional sexual harassment, Gatewood wrote in Tuesday’s statement that he didn’t “deny the feelings of my accusers.”

“While I know I had no sexual intentions toward my accusers, the thought that either woman felt even slightly uncomfortable in the workplace is unfortunate,” he said.

No criminal charges have been filed.

Two women have accused Gatewood of inappropriate behavior or sexual harassment. The accusations have spurred questions about whether a nationwide policy on sexual harassment is overdue for the NAACP. They also come amid the #MeToo movement, which aims to hold accountable those involved in sexual misconduct and those who cover it up.

Gatewood’s statement came after the second accuser, Courtney Sebring, published her essay on the Medium website on Friday. Sebring told the AP in a telephone interview Tuesday that she felt compelled to come forward after former state NAACP employee Jazmyne Childs held a news conference on Sept. 24 questioning why the national NAACP did nothing after an outside investigation concluded that her accusations _ first made in 2017_ were credible.

“Jazmyne released her story, and I felt so heavy and burdened by this secret,” said Sebring, 23. “I know that doing anything to keep Gatewood’s secret makes me sick. And I feel stronger now that this is out.”

Sebring said she was a 17-year-old summer intern in 2014 when Gatewood’s stares and touches made her so uncomfortable that she told her parents and asked the NAACP for help. Gatewood was second vice president at the time, a position he held until 2011, when he became an NAACP staff member.

Gatewood, 60, left the NAACP in 2017. He said the reason was to allow him to run for president of the chapter, but his departure also happened during an outside investigation that then-state NAACP president the Rev. William Barber had ordered.

At her news conference, Childs, 27, chastised the national NAACP for not acting on the investigation. The national NAACP _ which doesn’t have a sexual harassment policy _ suspended Gatewood the next day. “Given that this matter concerns an internal disciplinary proceeding, the NAACP will have no further comment,” the statement said.

Sebring said she was an idealistic teenager when she worked at the NAACP’s state headquarters, then located in Durham. She said Gatewood’s harassment started within a week after she arrived, and ultimately, she asked her father, a 6-foot-6 (198-centimer) law enforcement officer, to drop in on Gatewood in uniform in the hopes of intimidating him. Gatewood backed off for about a week, she said.

Sebring’s mother, Serena Sebring, told the AP that the state NAACP’s interim executive director at the time, Rosalyn Pelles, told her another young woman had been sexually harassed previously. She said Pelles’ solution was to tell Gatewood to not be in the same room alone with her.

“I expected more than, ‘Just don’t be in the same room with him,’” Courtney Sebring said. “I expected an investigation. I expected accountability for a summer of harassment. And I just expected a deep apology.”

Pelles and Barber wrote in a text to the AP that after Sebring’s complaint was investigated and found to be credible, the NAACP “made every effort to comply with the remedy sought by the young woman.”

They also noted that the state organization established a sexual-harassment and sexual-assault policy and conducted staff training after Sebring made her allegations.

The current president of the state chapter, the Rev. T. Anthony Spearman, said Wednesday that the national office has postponed the state elections, scheduled for this weekend, as it investigates the accusations against Gatewood. In addition, he said national President Derrick Johnson will address the state convention Saturday in Greensboro.

Gatewood, meanwhile said he wants to be reinstated. “Since I am innocent, I have faith, through a fair process, my membership will be restored,” he wrote in an email.

Sebring and Childs said Gatewood should be expelled permanently.

“I hope this does lead to a national policy on sexual harassment in the organization and a real look at all the cases,” Courtney Sebring said.