Victim Of Deadly Tractor-Trailer Crash On I-485 Identified; GoFundMe Page Created For Family

A GoFundMe page has been set up for the family of the driver of the tractor-trailer who was killed in an accident on I-485 in north Charlotte last week.

The driver has been identified as Kenny Maddox.  Maddox was driving for Mecklenburg Transportation, located in Swainsboro, Georgia. 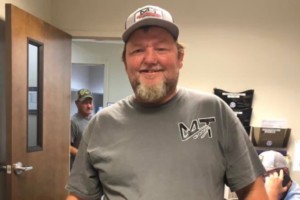 The owner of the company, Wade Ellington, created a GoFundMe page to benefit Maddox’s six children and five grandchildren.

Ellington says Maddox was a caring man who would help anyone in need.  To contribute to the GoFundMe account, click HERE.

CHARLOTTE, NC. —   A tractor-trailer bursts into flames after hitting a deserted car around 10 am Friday. The blaze shutting down a portion of I-485 for hours, causing miles of traffic.

North Carolina Highway Patrol says it all happened when a tractor-trailer, heading northbound on I-485, crashed into a black car parked on the side of the road. The driver of the tractor-trailer was pronounced dead at the scene. We don’t know his identity, but troopers say he’s from Georgia.

A portion of the interstate was shut down for nearly six hours. Michelle john was stuck in the traffic.

“I feel horrible for the families, everybody involved, that’s horrible. Praying for everybody,” says John.

It happened  on the outer loop of I-485. near W.T. Harris Boulevard at Northlake Centre Parkway.

The man who owns the black car told troopers his car broke down on the way to a job interview.  He pulled the car to the right shoulder of the road, put his hazard lights on, and had a friend come pick him up. He says he was not there when the accident happened, and his car was not obstructing traffic. Highway Patrol says that is under investigation.

Earlier in the day, witnesses had told investigators a different story. Saying a car tried to merge, and hit the tractor-trailer and the driver of the black car ran away into the woods.

Troopers tell WCCB if the car is found to have been obstructing traffic, the driver of the car could face charges.

According to a North Carolina State Trooper at the scene of the crash, a car struck the tractor-trailer before the truck ran into the concrete barrier and burst into flames.

CHARLOTTE, N.C. — At least one person is dead following a fiery crash involving a tractor-trailer on I-485 near W.T. Harris Boulevard.

The accident occurred around 10 a.m., on Friday morning. The Charlotte Fire Department says one lane is open in both directions and travelers should expect significant delays.

Avoid the area or use an alternate route if possible.