KANNAPOLIS, N.C. —  A Kannapolis man is in jail after authorities say he kidnapped and shot his estranged wife on Tuesday morning.

According to officials, at about 7:15 a.m. on Tuesday, 66-year-old Gary Belk Sr. showed up to his wife’s job on Denver Street in Kannapolis as she was arriving for work, armed with a handgun.  Valerie Belk is an administrative assistant for Kannapolis City Schools, according to her LinkedIn account. 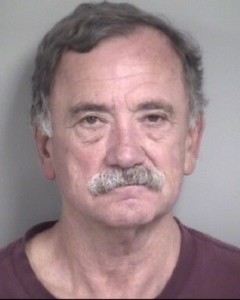 Belk Sr. pointed the gun at his wife, Valerie Belk, and ordered her to to get inside his car and to drive around the block.

Authorities say in the area of North Ridge Avenue, near First Street, Valerie Belk tried to get out of the car and run.  Investigators say Belk Sr. then fired one shot from his handgun, striking Valerie Belk in the shoulder.

Valerie Belk was able to get back in the car and leave the scene.  She sustained non-life-threatening injuries in the shooting.

Gary Belk Sr. was located and taken into custody at his Rowan County residence later that day.  He is charged with first degree kidnapping, assault with a deadly weapon serious injury, gun on educational property, and domestic violence protection order violation with a deadly weapon.

He is being held at the Cabarrus County Jail under a $250,000 secured bond.