Rock Hill Police have released a photo showing the actual suspect vehicle connected to the attempted abduction of two kids at a school bus stop off Patriot Parkway on October 15th. 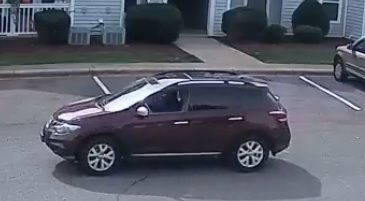 The vehicle described as a burgundy or maroon colored Nissan SUV. Possibly a 2014 model Murano.

Anyone with information about this vehicle or the suspect is asked to call the Rock Hill Police Department at 803-329-7293.

“It’s crazy to think that somebody would try and do something like this to kids,” said Rock Hill resident Julio Martinez.

Police say a man circled the stop and tried to snatch two girls, ages 10 and 11, as they walked home.

“They started screaming,” said Lt. Michael Chavis with the Rock Hill Police Department. “Eventually he let go of the book bag, and they took off running to the apartment complex.”

“I have these two little young girls right here, and I would be devastated if something like that was to happen to my child,” said Martinez.

Martinez says he plans to change his routine to ensure he or his kids’ mother is always at the stop when the girls are dropped off.

Another resident tells WCCB there are about 50 to 75 kids dropped off at the apartment each day. They say they’re troubled to learn someone would try and abduct a child.

“You think nothing is going to happen. They’re right there. They’re right at the house, they’re two minutes away,” said Kysia Lewis, “you can see the bus stop. Then boom, something like this happen in your neighborhood and that causes a wake up call.”

Parents now promising to be more vigilant and present.

“I’ll probably try to change my schedule to make sure my daughter is safe at school while I’m at work,” said Lewis.

Rock Hill police say the suspect is a black man in his 60s with slicked back hair and some curls in the back. He was wearing a black shirt and khaki pants.  Witnesses say the man was driving a burgundy SUV.