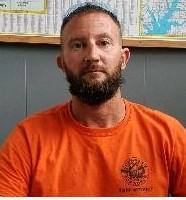 Lemuel Charles Hoover III is accused of robbing the Crossroads Drive Walmart around 10:30pm on Tuesday and the Shelton Avenue Dollar General around 9:20am on Wednesday.

Police say Hoover walked around Walmart briefly Tuesday night before approaching a checkout, pulling up his shirt to reveal the grip of a handgun, and taking off with an undisclosed amount of money from the cashier.

Early Wednesday morning, Statesville Police say officers with the North Carolina Department of Public Safety – Probation and Parole arrived in the area looking for Hoover, who was accused of cutting off his electronic monitor.

Officers reportedly spotted Hoover in the area of Wilson Lee Boulevard and Durham Avenue but were unable to apprehend him.

Around 9:20am, a suspect matching Hoover’s description reportedly robbed the Dollar General on Shelton Avenue.

A short time later, police say they located Hoover on West Raleigh Avenue and took him into custody without incident.

Hoover was identified as the suspect in both armed robbery cases.

He is charged with two counts of robbery with a dangerous weapon. He was taken before Magistrate Watkins and issued a $150,000.00 secured bond. Additional charges on Hoover are pending for tampering with an electronic device.