CHARLOTTE, N.C. — Grab your Christmas sweaters, enjoy a drink from a red SOLO cup, and get ready to laugh your ass off. The Great American Trailer Park Christmas Musical runs through December 22nd and you are guaranteed to enjoy this masterpiece from Actor’s Theatre of Charlotte. 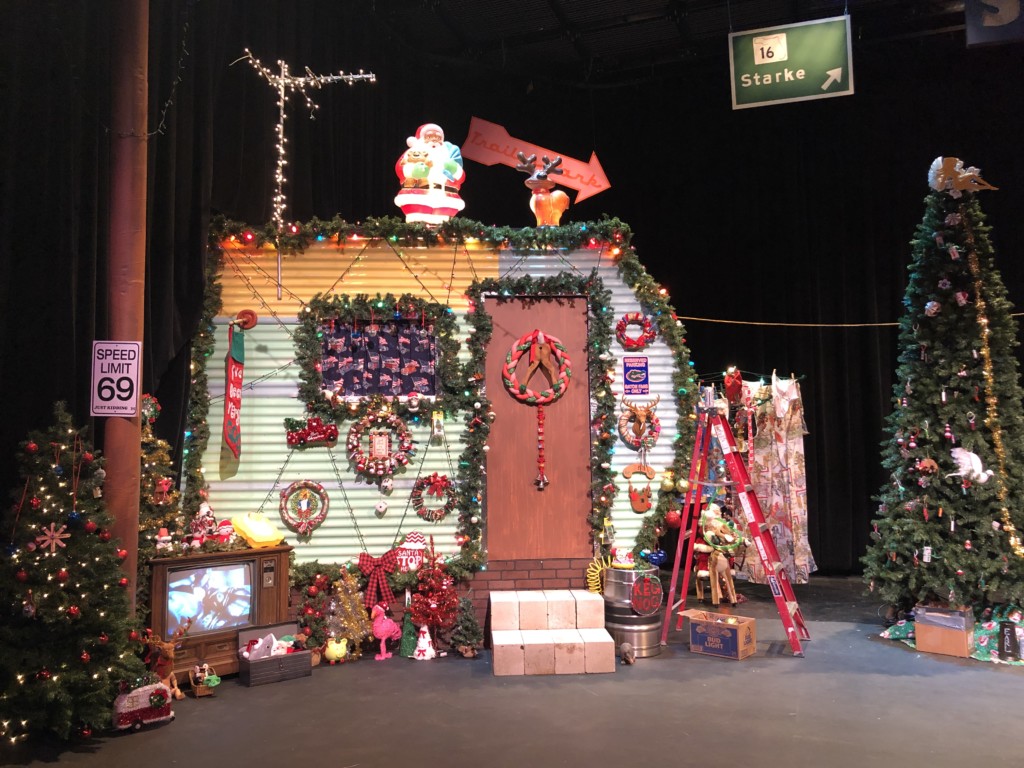 The Great American Trailer Park Christmas Musical takes place at the “world famous” Armadillo Acres Trailer Park in aptly named Starke, Florida, and is the brainchild of playwright Betsy Kelso and David Nehls who wrote the music and lyrics.

You will immediately feel the Christmas spirit from the second you walk up to Hadley Theater at Queen’s University, Actor’s Theatre of Charlotte’s present home. If you are lucky, you will be greeted at the door by none other than Chip Decker, ATC’s executive director and director of the show, bartending at a pop-up cash bar equipped with local craft beer and wine poured into red SOLO cups, one of the many subtle (and not so subtle) details ATC creates to immerse its audience into a musical based in a trailer park community.

On your way to your seats, be sure to stop for a photo op in the one-of-a-kind NASCAR nativity, including a baby in a PBR box, pink flamingos, and Yoda…a once in a lifetime experience to be certain. 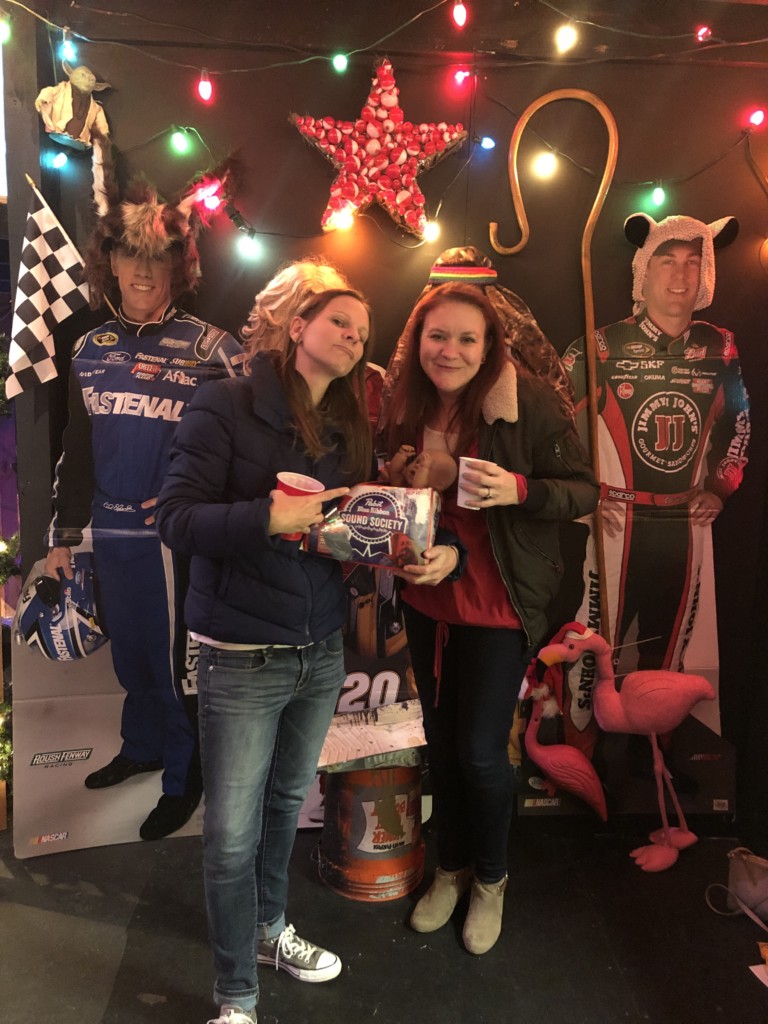 The set is a spectacularly detailed time warp into your tackiest relative’s fantasy, including a functioning box television set, kitschy Christmas decorations completed by a mudflap girl Christmas tree topper, a tire swing, and Christmas lights as far as the eye can see, save for the two trailers center stage.

The show opens with a live four-piece band that is not only an integral part of both the cast and clever set, but also provides all musical accompaniment throughout the performance. In the first scene, we find our favorite Armadillo Acres’ residents preparing for an annual Christmas decorating contest, but a new Scrooge-like resident is trying to wreak havoc on their plans. Betty (Karen Christensen), Linoleum (Renee Welsh-Noel), Pickles (Lizzie Medlin) and Rufus (Nick Culp) are determined to break the “Armadillo Acres curse” and finally win this year’s contest for most festive trailer park in Northern Florida, but Darlene (Katy Shepherd) wants nothing to do with Christmas. 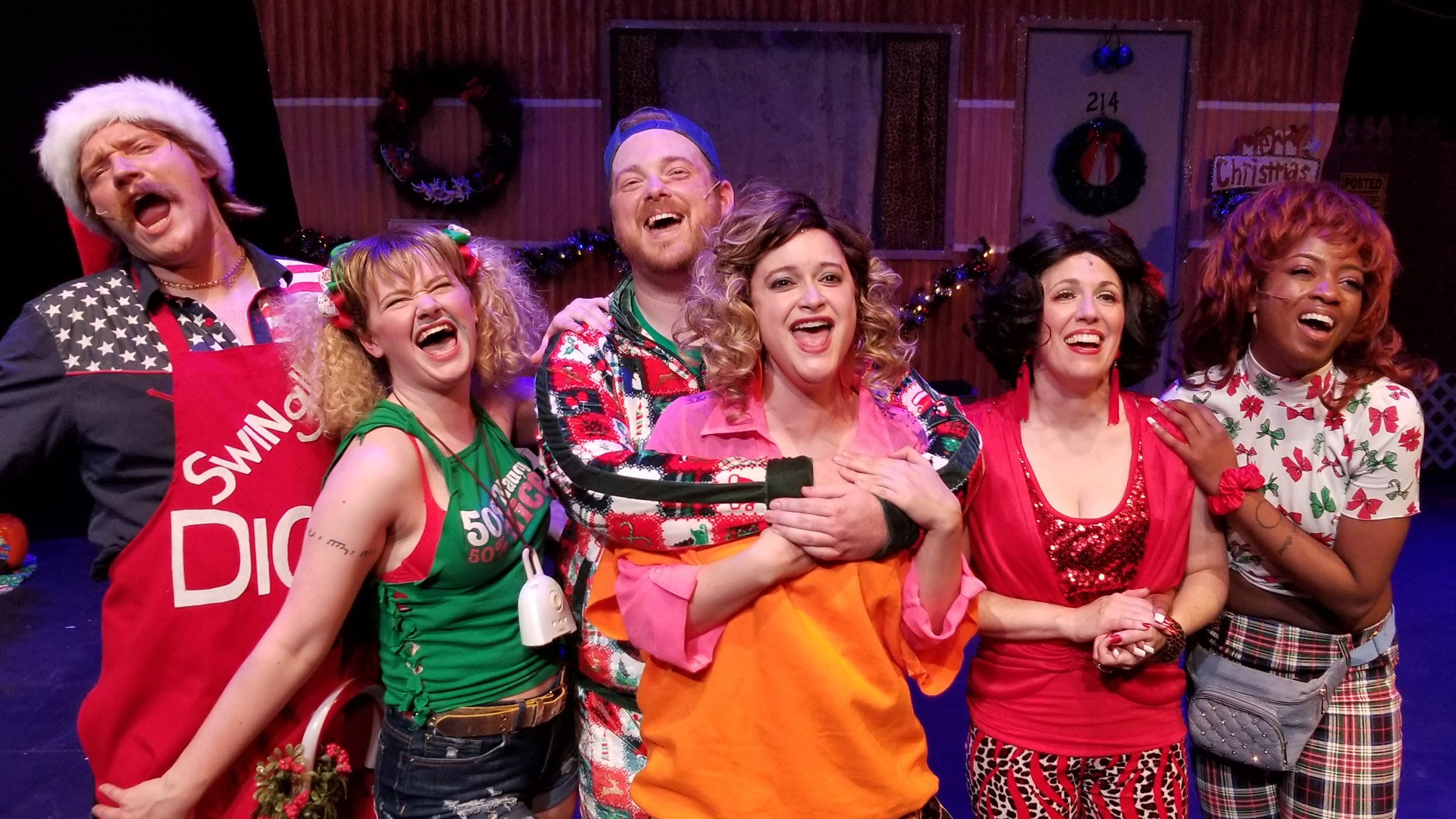 This point is made very clear by the property line that Darlene has designated with tape that travels the length of the ground and up the tree that splits Rufus and Darlene’s lots. While Rufus’ trailer, yard and even his clothesline are literally covered with Christmas decor, Darlene’s trailer has no decorations at all, save for a few no trespassing signs and a lawn gnome decked in leather. 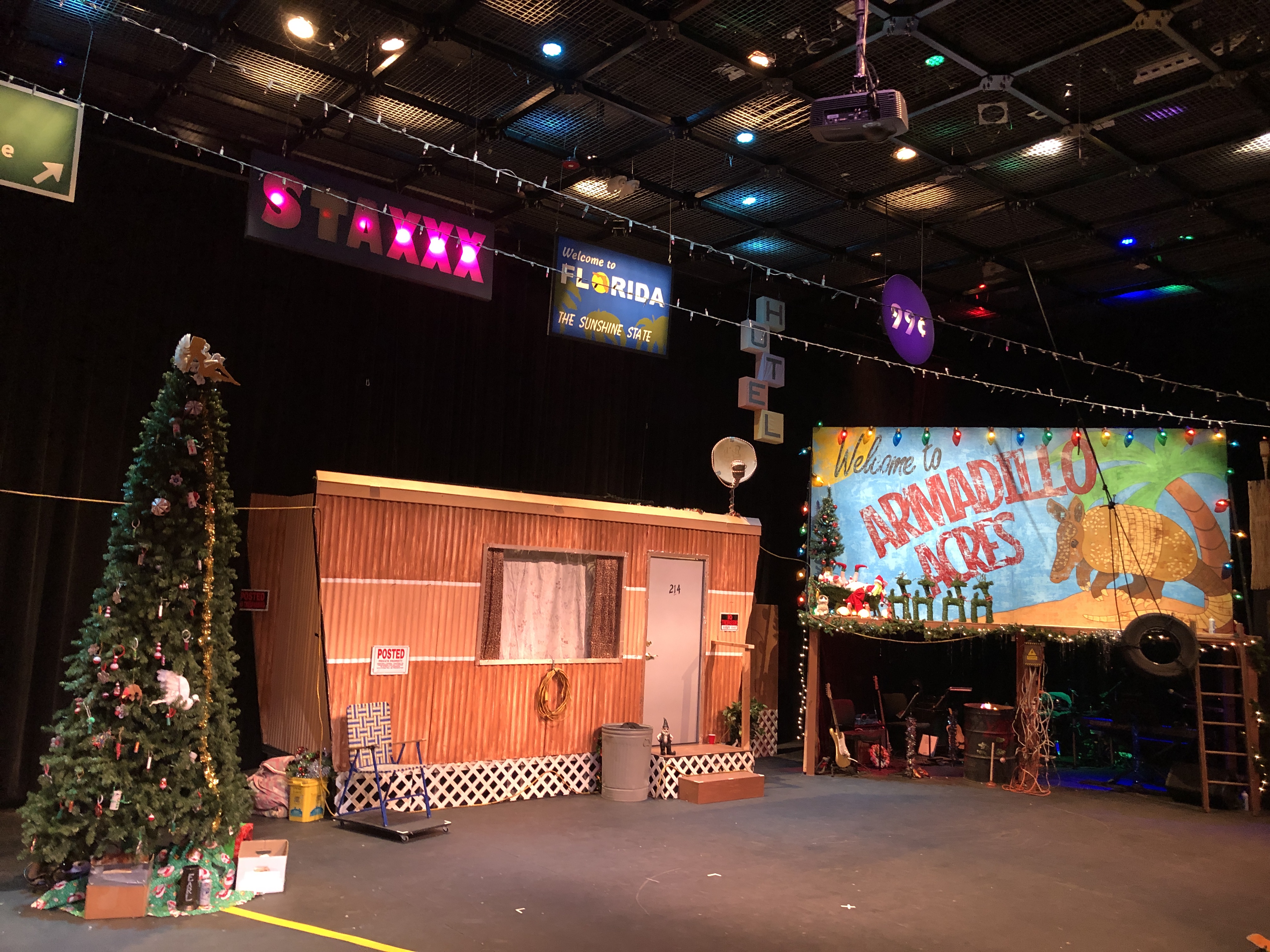 But things begin to change when Darlene confronts Rufus about stealing her cable. After a shocking plot twist, Darlene develops a new outlook on Christmas when she gets amnesia from being electrocuted by a badly spliced plug. The neighbors are now on a time crunch to make sure Darlene doesn’t return to her negative ways before the contest judging.

Shortly after the opening act we meet Jackie (Ashton Guthrie), Darlene’s rich and cocky boyfriend who owns the finest restaurant in town, Staxxx pancake house. Jackie definitely gets the crowd excited with his debonair baritone and splashy musical numbers….or maybe it’s the contents of his pants. Either way, Jackie is set on getting the old Darlene back and threatens to bulldoze the entire trailer park and all its residents if anyone gets in his way.

From start to finish, Nehls’ delivers hilarious lyrics and laugh-out-loud songs that perfectly define the spirit of the musical. These musical gems are made even more perfect by the delightful harmonies and artistic prowess of the cast and band. Five minutes into the show and you quickly become aware of the talent that resides in Charlotte.

The show’s choreography, by Tod Kubo, can also not be overlooked or overstated for its creativity. During one of the production’s standout performances, we discover the cause of Darlene’s hatred for the world in a musical number that features Linoleum on a hoverboard, Pickles on Heelys, and Betty on an electric scooter – choreographed at times with the entire cast dancing simultaneously on stage.  (I can barely stand on a hoverboard, let alone sing and dance on one around a stage.) 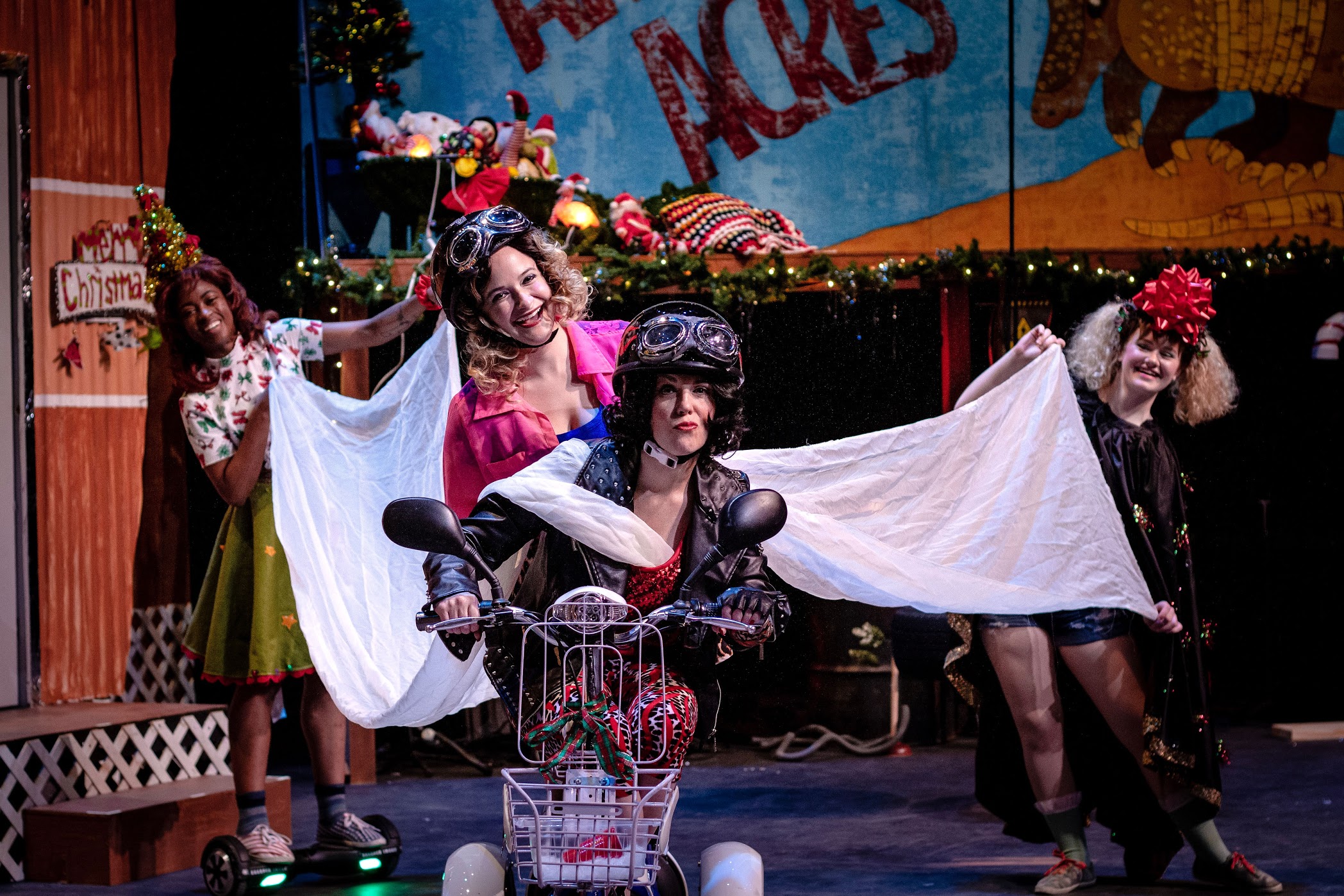 There is never a dull moment in this zany holiday spectacular that will warm its way into even the scroogiest of hearts, but prepare for R-rated dialogue and be sure to bring your sense of humor. ATC’s production of The Great American Trailer Park Christmas Musical is by far one of the most entertaining shows you’ll see this year, and it easily earns its standing ovation.