8:46 Of Silence In Conservative South Carolina House For Floyd 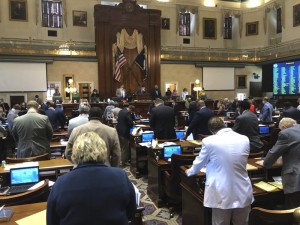 South Carolina lawmakers stand for eight minutes and 46 seconds of silence in honor of George Floyd, killed by a Minneapolis police officer, during a session of the South Carolina House on Wednesday, June 24, 2020, in Columbia, South Carolina. The leader of the conservative, Republican-dominated chamber asked for “thoughtful prayer.” (AP Photo / Jeffrey Collins)

Rep. Chris Hart, a Black Democrat from Columbia, asked lawmakers to not just have a moment of silence, but to stand quietly the entire time prosecutors originally said a Minneapolis police officer had a knee on George Floyd’s neck.

Almost all the 79 Republicans, all of whom are white, stayed in the chamber alongside the 44 Democrats.

“When God brings the whirlwinds and storms, we’ve got to be ready,” Hart said.

As several black lawmakers turned on the timers on their phones, Speaker Jay Lucas called for a moment of thoughtful prayer” that lasted much more than a moment.

Eight minutes and 46 seconds has become a rallying cry against racial injustice, although prosecutors later said they were mistaken and the officer knelled on Floyd’s neck for 7:46.