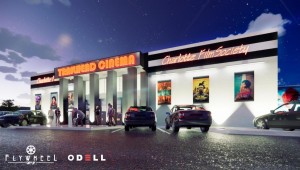 CHARLOTTE, N.C. — In May, Charlotte witnessed the closing of The Manor Theatre, leaving a gap in the foreign and independent film exhibition for the city, now The Charlotte Film Society is stepping up to bridge that opening in the market.

The Charlotte Film Society announced that they have signed a letter of intent with Flywheel Group, LLC, and started a fundraising campaign to open a 3-screen non-profit arthouse community cinema with an anticipated opening date in 2021.

The goal for the cinema will be to serve as the new home for foreign and independent films in Charlotte. Also, the Charlotte Film Society plans for the community cinema to be a resource for local and regional filmmakers, a space for local film festivals, and an educational and cultural film hub for the city.

According to a press release from the Charlotte Film Society, retired Charlotte Observer movie critic Lawrence Toppman stated that Charlotte is the largest U.S. city without a theater devoted to non-mainstream movies. “We’re rightly proud of our culture, from the symphony to the ballet to the opera,” Toppman said. “But without an alternative movie house, they’re like a beautiful smile that’s missing a tooth.”

The Charlotte Film Society believes it is important and necessary for Charlotte to have a dedicated community arthouse cinema.

Brad Ritter, Charlotte Film Society Board President and longtime General Manager of the Manor Theatre made the following statement about the new cinema:

“The new Charlotte Film Society Community Cinema will act as the cultural centerpiece for all community film organizations in Charlotte and the surrounding areas. We will offer the same great film programming that the Manor had, and by adding the third screening room we will have the flexibility to expand upon the Manor model. Being a 501(c)(3) non-profit, we will be able to provide an affordable space to other local film organizations and we will also expand the educational component of our programming.”

The new Charlotte Film Society Community Cinema will be located in the Trailhead Arts District adjacent to the Sugar Creek stop on the LYNX Blue Line. The Trailhead district is poised to become an important and vibrant arts destination, and the new cinema will be an important component of arts offerings in the area.

In its initial fundraising goal, the Charlotte Film Society hopes to receive community support and investment of $150,000 to purchase projection equipment and begin the construction of the new cinema space.

Click here for information on the Charlotte Film Society.

Click here for information on The Manor Theatre closing.